Listen to the audio cast:  The Destruction of Margit Bridge (The Siege of Budapest Tour – Part Two)

On Saturday, November 4, 1944 the Margit Bridge, one of the main crossings of the Danube, was packed with automobiles, streetcars and pedestrians. City dwellers crossed back and forth between Buda and Pest going about their daily business. At the same time, German troops were carrying out a military exercise at the bridge. They were attaching primed explosive charges to the structure. These were to be detonated if and when the bridge might need to be destroyed in order to stop the advancing Soviet army, which now stood only 20 kilometers east of Pest.  The situation was growing ever more dangerous. The thunderous boom of artillery had been heard in the distance for days. Suddenly a loud explosion at the bridge brought the danger straight to the heart of the city. 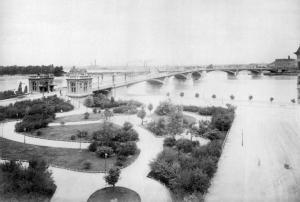 Margit Bridge at the turn of 20th century

In the early afternoon, a watercraft passing beneath the bridge accidentally ignited one of the primer fuses, causing a violent explosion.  Three pillars on the Pest side of the bridge were blown up, causing much of the structure to collapse into the Danube. The chilly waters of the river suddenly became a final resting place for hundreds of civilians caught by happenstance on the bridge at the time of the explosion. 640 soldiers, 90% of whom were Hungarian also lost their lives. This was an ominous sign of the death and destruction that would descend upon the city in the coming months. A month and half later, Budapest would be surrounded by the Soviet Army. The battle in and around the city would rage for over one hundred days. In this urban war zone, Hungarian soldiers and civilians would fight a multitude of enemies: the Soviet army, at times the “protecting” German army, as well as the Hungarian home grown fascist Arrow Cross Party. This was not just a fight for the Hungarian capital, but also a fight for the soul of a nation and its very survival.

It was also a battle that should never have been fought. Both German and Hungarian Army commanders were in agreement that Budapest should be declared an open city, meaning that it should not be defended. They realized that fighting for the city would be a hopeless cause. It would only lead to high rates of casualties, loss of essential military equipment and needless destruction. Sieges on the Eastern Front during World War II were always in favor of the side with greater amounts of men, material and weaponry. In this respect, the Soviets held a huge advantage.

Ironically, the pre-siege leader of Hungary, Admiral Miklos Horthy and the man the Nazis replaced him with, the fanatical Arrow Cross leader Ferenc Szalasi, had diametrically opposed views on almost everything with only one exception.  They both believed that Budapest was already lost. Szalasi actually said, “Budapest must be evacuated and we must make a strategic retreat to the Transdanubian hills.” 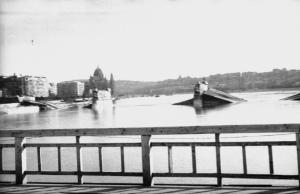 Looking downriver towards the Margit Bridge after it was accidentally destroyed

Unfortunately there was one man who wanted the city to be defended at all costs, this was Adolf Hitler. His strategic reasoning, though flawed, was also best expressed by Szalasi when he stated, “the Germans want to gain time by defending Budapest.” Despite this, several German commanders tried to persuade Hitler to allow a retreat. Hitler’s reply was twofold. First, he replaced dissenting commanders with compliant individuals. Secondly, he issued directives, such as the one on November 23rd, that no houses in Budapest be abandoned without a fight, regardless of civilian casualties or material damage. From that point forward, the city’s fate was sealed and the siege just a matter of time. The Margit Bridge was the first casualty in what would become a Battle for Budapest.