A jarring spectacle awaits those unsuspecting pedestrians strolling along Kopernyka Street in Lviv. Past the first floor shops and multi-storied apartment buildings piled one atop another there suddenly appears a fence of forged iron. Behind this stands the Potocki Palace. Here, set back rather incongruously, looks to be a bit of fin de siècle France. A feeling of the surreal pervades its placement on what seems to be the wrong street, in the wrong city, lost amid the wrong nation. It is a sight of fantastical surprise. Much of its magnificence stems from its unexpectedness. For all the wrong reasons the Potocki Palace is so incomprehensibly right. 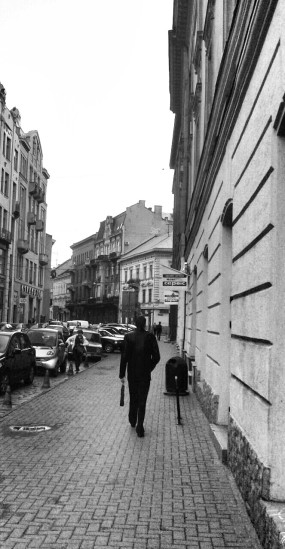 A Palace To Match The Potocki’s
A palace in Louis XVI style on a side street off the main boulevard in Lviv, Ukraine, can it be real? How did it end up there, by incident or accident? Was it the product of pretentious gilded wealth?  All of these questions come to mind because of what the Potocki Palace is and who built it. The palace consists of three stories and three halls, a Beaux Arts, late 19th century masterpiece. It seamlessly integrates classical, renaissance and baroque elements. It brings to mind a manor house gone mad with grandeur. The French stylistic influence is apparent, as it should be since it was first designed by a Frenchman then adapted by a local Polish architect. The interior contains marble fireplaces and ornate mirrors. It contains several colored rooms, including Blue and Red ones, where the walls at one time were covered in silks of the same color. There was a hall covered in mirrors, a touch of Versailles in what was to become and still is today Lviv’s most magnificent palace. Designed for meetings and official receptions, during the winter it hosted grand balls and banquets. Social gatherings warded off the depressing effects of dark, cold Eastern European winters. The Potocki Palace was the place to wine and dine Galicia’s glitterati. It was also a direct reflection of the family that it was named after. The Potocki’s were among the wealthiest aristocratic families in not only Galicia, but all of Austria-Hungary. They were rivals to all but the Habsburgs in fame, glamour and wealth. 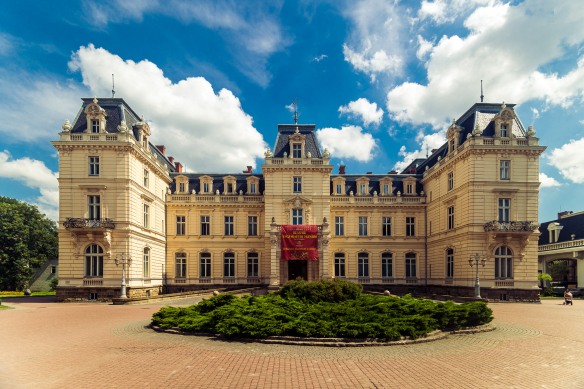 Amid a sea of urbanity stands the Potocki Palace in Lviv (Credit: Andrey Okhrimets)

The Potocki’s were an ancient and noble Polish aristocratic family. Their lineage stretched all the way back to the beginning of the Middle Ages. Through the centuries they managed to acquire vast tracts of land and titles of nobility. They parlayed positions as military leaders and statesmen into political power in the Polish-Lithuanian Commonwealth. Following the Austrian takeover of Galicia in the Polish partition of 1772 the Potocki’s managed to insinuate themselves into the good graces of the Habsburgs with their loyalty. Through this strategy they became perhaps the most powerful of the Polish elites in Austria’s far eastern frontier. This was a mutually beneficial strategy, as the Habsburgs were not interested in pouring resources into the province, but rather extracting them. The Potocki’s were more than glad to assist them if it solidified their own exalted status. The land and structural holdings of the Potocki family were vast in the extreme. As late as the first half of the 20th century they held approximately 25% of the entire land area of Galicia. They owned at least forty chateaux, manor houses and palaces scattered across the province. Among these holdings were a mid-19th century hunting homestead on the edge of Lwow (Polish name for Lviv). It was owned by Count Alfred Wojciech Potocki, a politician and entrepreneurial businessman who had started sugar production and textile manufacturing businesses. He was intimately involved in political affairs as a member of the Galician provincial parliament and the Austrian Empire’s House of Lords. His political interests meant that he spent a good deal of time in Lwow. The count decided to have his hunting lodge pulled down. In its place, he envisioned the construction of a grand palace that would play host to dignitaries and officials from across the empire. This was the genesis of the Potocki Palace.

Marriages of Inconvenience
Unfortunately, Alfred Wojciech, would die a generation before its completion. His son, Alfred Jozef, would inherit the project. Alfred Jozef was more politically accomplished than his father. At one point, he attained the position of Minister-President of Cisleithania, which was the head of government for the Austrian administered portion of the Austro-Hungarian Empire. At other times he held positions as Minister of Defense and for Agriculture. Due to his stature, it was little surprise that when Emperor Franz Josef toured Galicia in 1880 that a reception was held for him at Alfred Jozef’s newly completed palace. It was at this reception that Alfred Jozef’s wife, Maria Klementyna famously refused to stand when the Emperor entered the palace at an official reception. Maria also came from the elite of Polish aristocracy, from the Sanguszko family. She was a Polish patriot through and through, having little use for Austrian rule over what she felt were ancestral Polish lands. The Emperor ignored the slight. Everything else with his visit to the palace went smoothly. This visit inaugurated an era where the Potocki Palace took its rightful place as the preeminent official meeting place and residence in the city. This status largely continued right up until the outbreak of the Second World War. Of course, the war performed a radical transformation on Galician society

Following the imposition of Soviet rule, the Palace’s surroundings underwent radical change. Much of the adjacent parkland was developed into apartment blocks. The urban environment of the city encroached on both sides of the palace facing Kopernyka Street. Only at the front, where it was set back from the street, could those glimpsing through its magisterial gates perceive the depth which had originally been part of the design. This had been done to make the structure look like it was part of a park like setting. Such visual designs were now a thing of the past, as was the Potocki family in Galicia. The family’s surviving denizens had fled into western European exile. The role of the palace changed from the mid-20th century onward as it went through several iterations. Sovietization was imposed with characteristic thoughtlessness. Only a group of mind numbing Soviet bureaucrats could create such a name as the Institute of Geology of Mineral Resources of Academy of Science Ukrainian Soviet Socialist Republic. Fourteen words, ten that were polysyllabic and four of’s, added up to one long title that was quite a mouthful of banality. Nonetheless, this was one of several Cold War era titles and uses for the palace. It also gives an idea to the fall in prestige for this brilliant architectural creation. Later and much more appropriate, the Palace became a Civil Registry office for weddings. Marriages were finalized inside its grand halls. This was a bit of unintended aesthetic symmetry, since the palace’s exterior does seem to have a festive air about it. Wedding ceremonies still occur on-site today. 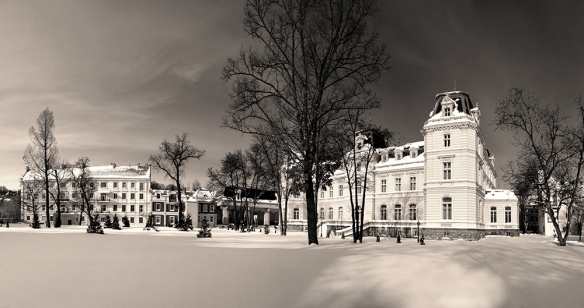 A Palace for all seasons – Potocki Palace in the winter (Credit: Mykhaylo Kozelko)

A Palace’s Past Present
After the nation of Ukraine formed in 1991, the palace was co-opted for use as a presidential residence. It can now be visited for those wanting to view the interior which contains the Lviv Picture Gallery of the European Art Museum. In a sense, the Potocki Palace has come full circle. Its walls are now home to magnificent works of art just as they were at its inception. The artwork is a good match for the scale and grandeur of the structure. The original intent of the palace as a magnificent home for meetings, banquets and balls has also been reestablished. The Potocki Palace is a brilliant piece of the past surrounded by the present. A jaw dropping step stopper on a side street, it stands today as Lviv’s palatial pièce de résistance.