Tucked into the far reaches of southwestern Hungary is the village of Labod. For a nation known for limitless agricultural plains stretching across the Carpathian Basin, the woodlands that surround Labod are a pleasant surprise and not as rare in Hungary as one might think. Stereotyping a nation the size of Hungary (close to Indiana in size), as largely flat and featureless is an exercise in mythmaking. To be fair, large swathes of the countryside do meet this description. After all, for good reason Hungary was once known as the breadbasket of Central Europe. 70% of Hungary’s land is considered suitable for agriculture. Yet 19% of the country is forested. That does not sound like much, but since Hungary is one of the larger countries in central Europe, it has greater meaning. Consider that there are enough trees in Hungary today to cover 85% of neighboring Slovenia. That is a lot of forest, for a place supposedly covered by infinite grasslands.

A Roman Resurrection – The Fallow Deer
The region around Labod is also a reminder that despite two thousand years of radical changes to the natural ecology of Hungary there are still places that contain the essence of wildness. The landscape is filled with wonderful expanses of nature. One of the most surprising of which can be still be visited in the forests surrounding Labod. The area is best known for the phenomenal hunting on offer. It is here where wildlife, especially deer tend to flourish. Huntsmen come from all over the country to try and bag these elusive creatures. Most of them probably never realize that they are chasing one of the last living legacies of the Roman Empire. The remnants of ancient Rome usually bring to mind piles of stone in every form imaginable, crumbling buildings, Latin inscriptions, limbless and lifeless statuary. This is not the Roman legacy that was left behind in the region around Labod.

There are no magnificent ruins of once thriving cities hidden beneath the leafy forest foliage. There are no vestiges of ancient shrines to emperors who once ruled most of the civilized world, but are now just footnotes in a history book. Instead, what gallops through these woods, hides in the brush, suddenly appears at sunset and dusk is a miracle of nature, the fallow deer. Two thousand years ago there were no fallow deer in what is today southern Hungary. The last ice age, thousands of years before had wiped out the entire population. This all changed with the coming of the Romans, conquering eastward in the first century AD. They moved into a land they would come to call Pannonia. Today that former Roman province contains the western half of modern Hungary. 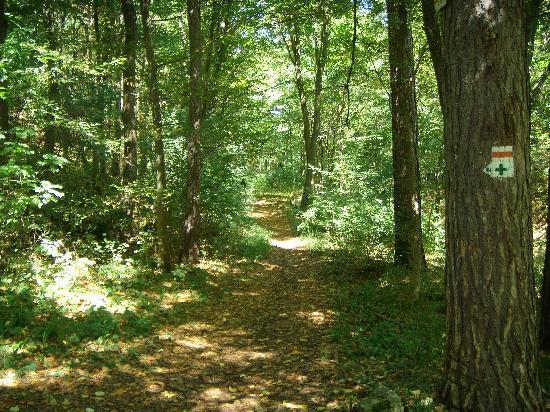 People come from all over Europe and even the world to hunt these magnificent creatures. Some of the world’s largest specimens have been bagged in the area. Yet to catch a glimpse of one, is much more delightful and also enlightening. The fallow deer’s chestnut coat showcases white spots in the summer, while in the winter those spots fade as the coat turns darker. The bucks have a charismatic look about them, with their broad, shovel shaped antlers. They can cover five meters in a single bound. These magnificent animals are living proof that some aspects of the past can be recreated. The irony is that the civilizing culture which brought the fallow deer back to Central Europe was not strong enough to survive.

Link To A Pannonian Past – A Fallow Deer Buck

A Fallow Force of Nature
No one will ever bring the Romans back, but the fallow deer acts as a living remnant, a natural legacy of their time in Pannonia. To pass life down through the centuries, into the present, is a much greater accomplishment than any ruin. This animal of an empire’s past, is a force of nature and living link to antiquity. Best of all, the opportunity to see one is greatly increased by the fact that Hungary has one of the world’s largest populations. The Romans could never have imagined such, but today their legacy lives and breeds in the deep forests around Labod.