This past week I was finally able to visit the National World War I Museum in Kansas City, Missouri. All the acclaim I had heard about the museum turned out to be true. The two short films I watched, including one entitled “Europe Before the War” were excellent. The exhibits were first class, especially the replicas of French, British and German trenches. Characteristic German thoroughness was on display in their replica trench. Even in the mud of northern France and Flanders, the German Army managed to be neat, clean and uber-organized. The same could not be said for the French, whose trenches looked ramshackle at best. As for the British ones, they were pragmatic and functional. One could learn a great deal about the warring nations just by studying their trench systems. 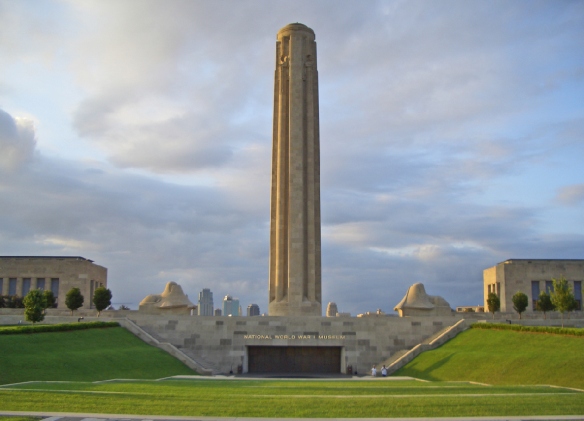 The Forgotten Fronts & A Memorable Artifact
My lone disappointment was with the museum’s treatment of the Eastern and Southern Fronts during the war or should I say the lack of a treatment. There was a small section within one exhibit that gave a broad overview of the front. This oversight is quite remarkable considering the Eastern and Southern Front’s dramatic influence on the Western one during the war. Consider that the German Army committed millions in men and material to these fronts during the war. Not to mention the fact that at critical junctures the Russian Army launched offensives in the east that drew German forces away from the western theater.

The outcome of the Marne and Verdun campaigns would have been very different if not for Russian offensives which benefited their western allies.  I have to admit I was not surprised that the Eastern and Southern Fronts were given short shrift. This was the National World War I museum of the United States after all. American forces only fought on the Western Front. Their experience was similar to that of the other Western Allies. The First World War has been seen in America through the prism of the Western Front and trench warfare, overcoming this bias was a bit too much for the museum. That being said, it is quite astonishing that my most lasting impression of the museum concerns an artifact from an obscure netherworld of the war. Behind a glass case in the exhibit area dedicated to the naval aspects of the war was a blue tunic. The text for this piece of clothing stated:

Bulgarian naval officer’s tunic
In 1915 the Bulgarian navy had six torpedo boats, a royal yacht, and several smaller vessels. Its largest vessel was a torpedo gunboat, the Nadiejda

The blue tunic looked to be in fine condition, with all of the brass buttons still attached. There were no signs of wear or tear.  I could almost imagine the owner, exactly a century ago, standing on deck as his boat patrolled close to the shoreline. The Black Sea calm, under a clear blue sky, the sunlight glittering on the water, war never looked so beautiful or benign. My imagination took me back to that distant sea for a moment before I came to my senses. Then I realized just how bizarre this tunic actually was. No imagination was required for such a unique artifact.

What Little Is Left Of Nothing – The Bulgarian Navy In World War One
Start with the fact that the tunic was a product of the Bulgarian Navy. As the exhibit text made quite clear Bulgaria’s naval fleet was miniscule. Its force of sailors would not have been much more substantial. Officers would have made up a tiny proportion of the force. This was a very rare find and research I did over the next several days confirmed the obscurity of artifacts related to the Bulgarian Navy. Searches on the internet and through my own personal library brought up only a couple of references to the Bulgarian navy during the war. The topic proved that even Google has its limitations. The only information available was a paragraph in a Wikipedia article on Bulgaria during World War One. It said, “Bulgaria possessed a small naval force of torpedo gunboats and patrol boats that were restricted to operating only in the coastal areas of the Black Sea and along the river Danube. Following the Second Balkan War the country acquired an outlet on the Aegean Sea and in January 1915 the “Aegean” Section of the Bulgarian Navy was created by a royal decree. Initially only 78 soldiers were assigned to the small force and were given a task to observe and defend the coastline by laying naval mines. These activities were centered on the ports of Porto Lagos and Dedeagach but the true development of the facilities there was hampered by financial difficulties”

My beloved 12 volume Marshall Cavendish Illustrated Encyclopedia of World War I, unsurpassed in breadth and thoroughness when it comes to coverage of the Great War, dismissed the Bulgarian Navy with a single sentence, “The negligible Bulgarian fleet, as we shall see, played no role at all in the First World War.” For all intents and purposes the fleet was a non-starter during the war. As for the sailors there was virtually nothing to go on, at least as far as a cursory search of English language sources goes. It is safe to assume that the Bulgarian Navy was essentially useless during the war with the result that it had become anonymous to history.  At least that is a logical explanation, but it still does not account for the fact that a world class museum in the heartland of America had rescued the tunic from obscurity.

A World Gone Mad
The most fascinating aspect of the tunic are the questions it has raised in my mind. Who gave it to the museum? How was it acquired? Was the donor a collector of obscure artifacts or a Bulgarian war veteran? Of the thousands of potential artifacts for display why did the museum decide to showcase a Bulgarian naval Officer’s tunic? The questions were many, but how and where to begin finding the answers? The most fascinating question for me is what does the Bulgarian naval officer’s tunic really represent? Does it somehow communicate the scope and scale of a far flung world war? How the war was fought not just in the trenches, but also on the high seas? Or how one hundred years ago in a world gone mad with militarism, in the process of committing suicide, small nations as well as large ones built military forces just to have them, no matter their usefulness or uselessness.