I can still remember the exact moment when I lost my innocence. Often people will say they lost their innocence the first time they were jilted in romance or during their first sexual encounter. My experience was totally different. I lost my innocence watching a TV movie. It happened on November 20, 1983. I was 12 years old at the time and had just started junior high school. Every weekday morning I attended Mr. Connelly’s 2nd period Social Studies class. One Friday morning he mentioned that we should watch a movie that weekend. It was called The Day After and would air on the ABC television network Sunday evening. The film was about a nuclear war between the United States and Soviet Union. I thought it sounded interesting, as did almost 100 million Americans who tuned in that Sunday night. Exactly 55 minutes and 57 seconds into the movie, the possibility of hell on earth entered my consciousness as nuclear warheads sent vortexes of fire, flame and catastrophic levels of radiation onto eastern Kansas and western Missouri. The immediate destruction was terrifying and its aftermath worse as the characters reckoned with survival, only to experience slow, painful deaths. 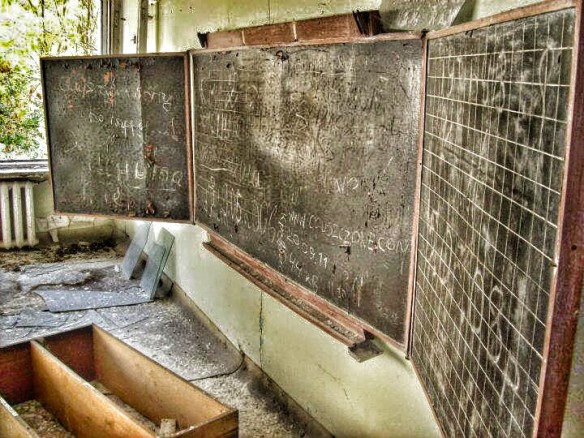 Chalkboard in a classroom at Middle School Number 3 in Pripyat

The world as I understood it died that evening. Nuclear war was no longer some vague concept, it was a distinct possibility. The worst part was that it could happen almost any minute. And nuclear war was always measured in minutes. In the time it takes to watch an average television sitcom, civilization could come to an end, for all time. I can still recall how I was barely able to sleep for several days afterward. Slowly I adjusted to this new and frightening reality. The threat of nuclear war would always be with me, as it would be with humanity. The movie started a personal fascination with nuclear war, nuclear weapons and nuclear disasters. Perhaps this was a reaction to the trauma I had experienced that evening. 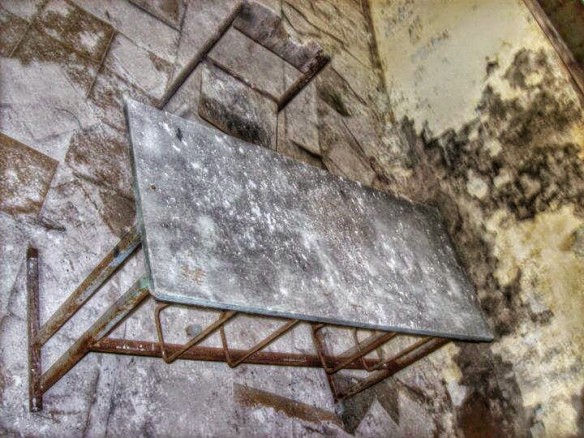 Permanent Scars – Chernobyl & The Long Goodbye
An odd and horrifying thing happened in the Soviet Union that would affect all things nuclear just two and a half years after The Day After aired. Thankfully it was not a nuclear exchange, but something similar in scope occurred. Radiation equivalent to 500 Hiroshima atomic bombs was released in extreme northern Ukraine and southern Belarus. This was the Chernobyl disaster, where on April 26, 1986 Reactor Number 4 suffered a catastrophic meltdown. The news spread around the globe along with radioactive fallout. This was a nuclear disaster, the likes of which had never before been experienced by humanity. The most frightening aspect was that the effects of radioactive contamination – covering an area the size of Belgium – were going to last for thousands of years. I found myself in the school library reading newspaper and magazine articles about the accident, trying to comprehend what would turn out to be a monstrous human tragedy. Chernobyl changed the world. It indirectly helped lead to the collapse of the Soviet Union, as Ukrainians and Belarusians lost faith in the communist system and the party leaders who tried to ignore the disaster. 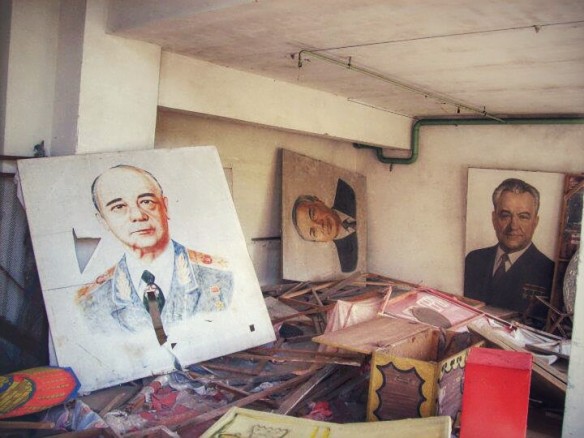 When the Soviet Union disintegrated five and a half years later, an independent Ukraine was formed. One of the legacies of communism Ukraine would struggle with was Chernobyl. The cost of containing the damage was exorbitant in scientific, financial and human terms. Yet life was never the same for those who had lived close to Chernobyl. Tens of thousands suffered from the poisonous effects of radiation. Overlooked, but often just as insidious were the effects of upheaval on those who were forced to relocate. Many could not cope and sank into depression, which led to alcoholism or much worse. A slow, grinding death replaced the more immediate one that had occurred in the wake of the meltdown. Things never returned to normal in the area, but as the years passed the survivors moved on, scattered in apartment blocks throughout Ukraine and Belarus. The world moved on as well, but could never quite forget. Chernobyl was a blight on the earth and human consciousness that left permanent scars. 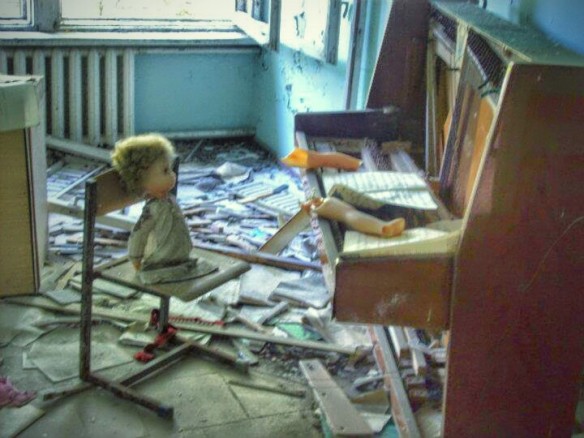 Music depreciation – doll at a piano

Ghost Of Civilization’s Past – Pripyat Middle School Number 3
In September, 2011 I traveled to Kiev for one reason, to visit Chernobyl. Foreign tourists were now allowed inside the exclusion zone. Daily tours could be easily arranged out of the Ukrainian capital. These tours included glimpses of the Chernobyl Power facility, the sarcophagus covered Reactor Number 4 and an opportunity to visit the once bustling, but now totally abandoned city of Pripyat. 49,400 people, the entire population of Pripyat, had been evacuated 36 hours after the meltdown. All the inhabitants had vanished, literally overnight. A guided tour was how I came to be standing inside Pripyat Middle School Number 3, just a few kilometers away from the now confined, but still deadly detritus of Reactor Number 4. Outside the sun was shining and the leaves were just beginning to turn autumn colors beneath a deep blue sky. Inside the school it could not have been more different. There was dust and debris everywhere, the air tasted like chalk and footsteps echoed down empty corridors. My tour group of twelve, all foreigners, except for a guide and driver, wandered about snapping photos.

Former classroom ravaged by radiation, looters and time – none of which can be seen

I had never seen anything like this. The school’s look and feel had little to do with the way things were in Pripyat pre-meltdown. Looters had ravaged the place. It was a microcosm of what the world would have been like downwind of a massive nuclear exchange. At one time, Pripyat had 15 primary schools, 5 middle schools and one professional school. At Pripyat’ Middle School Number 3 hundreds of teenagers had walked the now ruined halls. On the chalk boards, ghosts of lessons were still discernible. In the gym, I peered into the corners where first kisses had once been exchanged and hormones started to rage. Songs extolling the Soviet Union would have been sung here. All of this was now in the past. It was over, but it was also frozen. This was a place where the ghost of the late Soviet Union’s past still stalked the hallways. It was a school in the truest sense of the word, since there was still so much to be learned here. There were lessons to be discerned on the frailty of human existence, the meaning of abandonment and the end of civilization. The school was a boneyard of history.

The Day After Every Day – An End To Innocence
I was able to discern eerie similarities between Pripyat’s Middle School Number 3 and Valdese Junior High, where I attended school from the 7th through the 9th grades. There were poster boards covered with photos from class projects, adolescent sketches and idolized depictions of the world as teenagers see it. Windows were left open for natural air conditioning, wooden desks looked much the same and the classrooms were of similar size. The difference was that I had been able to finish junior high in the same place that I started. Not long after I went off to high school, they closed Valdese Junior High down. It was old and falling into disrepair. A few years later I climbed through a broken window to get inside. What I found looked about the same as the school in Pripyat. Both schools were now closed, forever. Looters had done their dirty work. The classrooms were covered with debris. 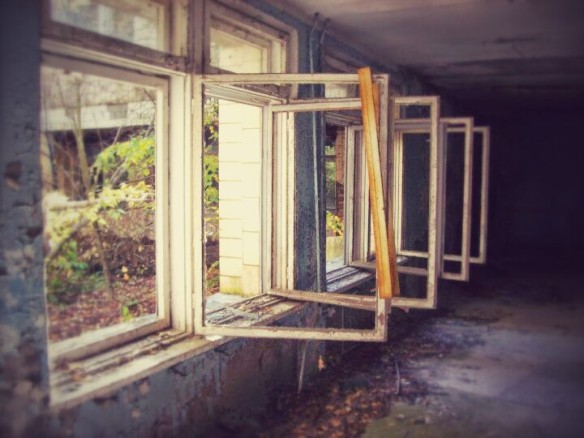 School is out, forever – Middle School Number 3 in Pripyat, Ukraine

It was sad, but outside my abandoned school’s walls my hometown continued to progress. It was not disrupted by a nuclear disaster. Valdese was no Valhalla, but it was not Pripyat either. The Day After was now every day in Pripyat. Nothing had been stolen from me in my school or hometown other than my innocence. The Day After had just been a figment of Hollywood’s imagination, a distant nightmare that I was able to conjure up once again in Pripyat. I was lucky, we were lucky. Pripyat could have been us. It still could be.

2 thoughts on “School Is Out, Forever – Pripyat, Chernobyl & Lessons On The End Of Innocence”