It was in Block 27 at Auschwitz that I came upon one of the most arresting physical representations of the Holocaust ever conceived. In one room of the block can be found The Book of Names. The title of the exhibit is perfectly descriptive, but trying to explain the effect of this voluminous compendium of death is not easy. Try to imagine the number and size of the pages it would take to print the names of 4.2 million people. Now imagine that after each name, the year and place where that person was born is given. Finally, try to visualize that at the end of each entry, the place where the person was murdered during the Holocaust is listed, if it is known. If you can imagine all this, then you can imagine The Book of Names. The entire exhibit stretches out over several meters with the large pages bound together in a multi rowed, thick compendium of tragedy. It is the thickest book I have ever seen before and I hope to never see another one like it again.

What makes this huge tome particularly unfathomable is its subject matter and what that endless list of names says about humanity. Everyone listed in the book was murdered due to a choice by one group of human beings to single out and destroy another group. This litany of depressing data gives the sparse details of the individual lives and deaths of millions. Open The Book of Names to any page and one is confronted with hundreds of lines that cause the senses to reel. Soon the eyes glaze over as one name looks like another name. After a couple of pages all those lines run together. The sheer immensity of this catalog documenting the humanity lost in the Holocaust can scarcely be conceptualized by the mind. The only way for me to make any sense of it was to seek out an individual name. I had one to focus on, a personal connection, that suddenly made my eyes stop and closely search all those lines for traces of an existence. 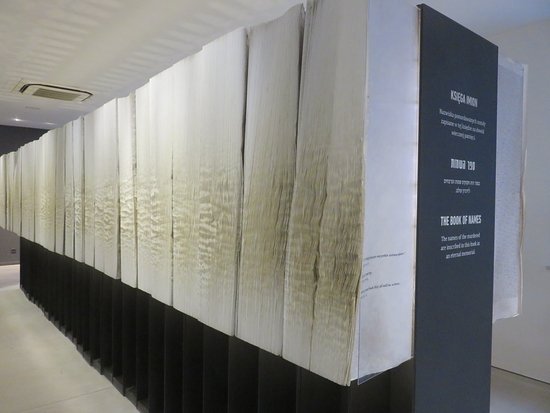 The Book of Names in Block 27 at Auschwitz

The Outlines Of A Life – The Power Of Presence
The name I searched for was that of Erno Berger. It took me several minutes just to find the specific page. There was not one Erno Berger, but many lines listing men with that same name from a multitude of places in Eastern Europe. There were thirty-one Erno Bergers in all. Just the fact that the name was repeated so many times was a chilling reminder to me the depth and penetration of the Nazi’s genocidal thoroughness. I began to study each Erno Berger entry more closely until I found the specific one I was searching for. Finally, I came upon the following entry: Berger, Erno, 2/3/1982 Belgrad, Yugoslavia, Place of death unknown.

It was a surreal feeling to find this Erno Berger. Suddenly, I felt a pulse of energy and interest. A tangible connection had been made. For a moment, at least for me, Erno Berger rose from beyond all those pages, he came back to life, if just for a moment. He was no longer anonymous or just another name among millions, but a person whose existence had been documented. He lived on in this handful of details, straddling a couple of lines his life and death came down to these inches. It is an extraordinarily powerful feeling to never have met someone, to have been born a quarter century after they died and yet feel like they are very close to you. I could not touch this man’s presence, but he was touching mine. I, a white, Anglo-Saxon Protestant with no Jewish blood suddenly had a connection, a thread that I could unspool and use to trace the outlines of a life lost among millions of others lost.

From Father To Son  – Making A Name For Themselves
Who was Erno Berger and why was I searching for him in The Book Of Names?  He was born in Belgrad during the late winter of 1892. His father was J Kohn. Eventually he migrated to Debrecen in eastern Hungary where he worked as an electrician. In June 1944, he along with nearly the entire community of Jews in Debrecen – 7,411 to be precise – was rounded up and deported. The deportees were sent either to Auschwitz or Austria where many more would die in forced labor battalions. Which one Erno Berger went to is still a mystery. Somehow he ended up in Bergen-Belsen where he died. One thing is for certain, he never came back to Debrecen. The only existing remnant of his existence is his name on a memorial wall. It can be found in the courtyard of one of only two active synagogues left in Debrecen. He never saw his ethnic Hungarian wife again or the lone child that was born to the couple not long after Erno’s deportation.

This son would be given the name of the father he never knew. His surname eventually changed, as so many Hungarians Jews did during the communist period to avoid persecution and any lingering anti-Semitism. Assimilation was no longer necessary to survive, but it was to thrive. The son would grow up to become a noted physician in the city that had rejected his father. He would eventually marry a Hungarian as well, just as his father did. This was in the late 1960’s rather than the mid-1940’s. Hungary was a very different place by then. The kind of place where a man with brilliant intellect and smarts could achieve great things, despite or perhaps because of communism. And this son did just that. He healed, he taught, he loved and he lived. If not for him, I would never have been standing at Auschwitz searching for the name of Erno Berger.

A Lot To Learn – Ancestral Feelings
The son and by extension his father really must have been something, to have such power and influence continue beyond life. I never met either of them and never will. The day the son died I was still in high school. I did not know anything about Hungary and the Holocaust meant little to me other than what we learned of it in history class. I had a lot to learn then, I still do now. Erno Berger and his son meant a whole new world to me because they were my wife’s grandfather and father respectively. It has been through her that I came to know them. And it has been through her that I can see them.

4 thoughts on “The Book Of Names – Erno Berger: A Resurrection At Auschwitz”