After a couple of days in Vilnius I decided that it was time to see something of the Lithuanian countryside. My newfound friends at Vilnius Home Bed & Breakfast recommended a day trip to nearby Trakai Island Castle. One look at a photo of Trakai convinced me this was where I should go. Trakai is the eye candy of Lithuanian castles. It sits on an island, its red brick image reflecting off the water. The photos I saw of Trakai before booking the tour were astounding. So much so that when the tour operator told me that the interior of the castle would be closed because it was a Monday, I could have cared less. Such minor scheduling details would not preclude me from taking photos or walking along the walls. Trakai was not going to be an exercise in history so much, as it was an exercise in vanity. Thus, I found myself at 10 a.m. on my last morning in Vilnius boarding a bus with a small group that included an English woman, her adult son and a broad shouldered, imperious looking Norwegian lady.

The Unimaginable Past – Kernave
Our guide was a Lithuanian woman who looked to be in her late 20’s. Once she started talking, she hardly ever stopped.  We heard, but did not learn, a withering amount of Lithuanian history over the next 45 minutes. Her idea of leading a tour was to tell us so much information that we would be too exhausted from listening to ask any questions. Between the bus ride and an unending stream of facts, I was ready to sleep for a month. Finally, the bus made a stop at an overlook for the ruins of Kernave. Here stood what was reputed to be the first capital of Lithuania. The ruins are a UNESCO World Heritage Site and were supposed to be the main attraction. Unfortunately, during the 1920’s a magnificent, yet entirely out of place neo-Gothic Church was constructed nearby. There were other churches in this area from the 15th through the 19th century, either they fell into ruin or were removed. The irony is that during Kernave’s golden age, the inhabitants were pagan. They were fighting for their very existence from Christian crusading Teutonic Knights. Now a massive church overlooked all that remained of their glorious past.

The remnants of Kernave sat on a plateau just above the Neris River. While I found the various mounds and ruins impressive it also was a reminder of just how few people lived in even the most important settlements during the early medieval period. A small town in Lithuania today would easily swallow these mounds the represented Kernave. During this time, the overwhelming majority of the population lived in the countryside, their existence was precarious at best. Kernave’s population would have expanded to capacity when they were under attack. It was as much a seat of protection, as it was of power. Kernave was likely the greatest Baltic hill fortress of its time. Nevertheless, its current condition did not look very impressive. Those were very different times, as unimaginable to us as today’s world would have been to Kernave’s residents. 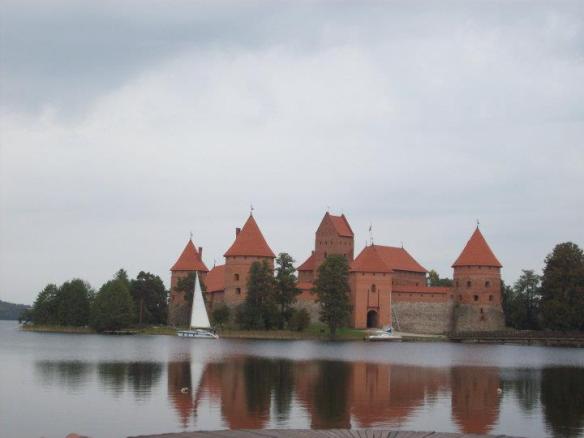 The Magic Of The World – In Progress
The guide continued to talk incessantly as we headed towards Trakai. It was difficult to even get in a word. When I did ask her a question, if it did not fit in with her pre-prepared narrative, she became rather abrupt. By the time we arrived in Trakai, I was less interested in seeing the castle than getting a break from her ceaseless chatter. I fled from the bus and headed straight towards the edge of Lake Galve, which surrounds the island that Trakai stands on. Just about the time I was getting ready to snap my first coveted photo of the castle, I noticed a sailboat sliding silently across the water. It was a moment of stunning beauty and picturesque serendipity. I was instantly pleased with the photo, which looked so enchanting that I could hardly believe such a scene was there for the taking. Sometimes beauty and tranquility conspire to create a perfect moment that captures the magic of the world in progress.

I then made my way over the footbridge leading to the castle. Though the interior was not open, just walking around the castle walls proved illuminating. Trakai Castle had undergone an extensive restoration which was visible to the naked eye. The lower parts of the walls were original and did not match up with the bricks that had been used to rebuild the taller parts of these walls. The restoration had taken over a decade. Strangely enough, it was done under the communist regime. This seemed odd, as the idea of nobility was anathema to the communists. I noticed this same phenomenon at work while visiting the Old Towns of Riga and Warsaw. What possessed these regimes to rebuild historic neighborhoods and structures was hard to fathom. Perhaps it was done in a paradoxical bid to create confidence in a communist system that was an imposition on national honor. A reminder that not all was bad. Or at least the past offered respite from the present. Whatever the case, the restoration was fabulously done.  It did make me wonder though, had the castle ever really looked this good. All restorations approximate the past. This one was so magnificent that any faults I could find seemed like mere quibbles.

At The Mercy of History – The Decline Of Trakai
And what of the history of Trakai Castle? The castle underwent three phases of construction between the latter half of the 14th century and the first half of the 15th century. Its principle usage was as a fortress guarding against attack by the Teutonic Knights. One of these attacks brought it to ruin in 1377. This brought home to me the martial prowess of the Teutonic Knights. Taking Trakai meant overcoming nature as much as man. The castle would be rebuilt only a few decades later in stouter and stronger form, accentuating the Gothic elements. After the Teutonic Knights were soundly defeated at the Battle of Zalgiras (more famously known as the Battle of Tannenburg) in 1410 the castle morphed into a palatial residence for the Grand Dukes of the Grand Duchy of Lithuania. The castle only went into perpetual decline after being badly damaged in the 17th century wars with Muscovy. It fell into disuse and was abandoned, left to the mercy of the elements.  The fact that it would eventually be resurrected in its current form did not mean that the ruins were without value, especially for artists.