I just could not let it go. Throwing the equivalent of sixty dollars down the drain was too much to stomach. I urged my friend to take the night train back with me from Krakow to Budapest. I did not want to surrender half the cost of a ticket no matter how minimal the loss. It would also mean an entire day spent in transit, wasting a precious day of sightseeing. These two factors made me overlook the painful memory of what had occurred just two days before on our trip from Budapest to Krakow. Surely if we survived it once, we could do so again. I tried to console my friend with the idea “that this would be the last time we ever had to do this.” Such flippant logic only went so far, because we were still going to endure it one more time. And that one time had been one too many. My friend was not happy about the thought of suffering another sleepless night or that “terrible banging noise”. Neither was I, but as much as I hated that first trip, it made for a hell of a story. In the pursuit of adventure and a good yarn I was ready to suffer it all over again. 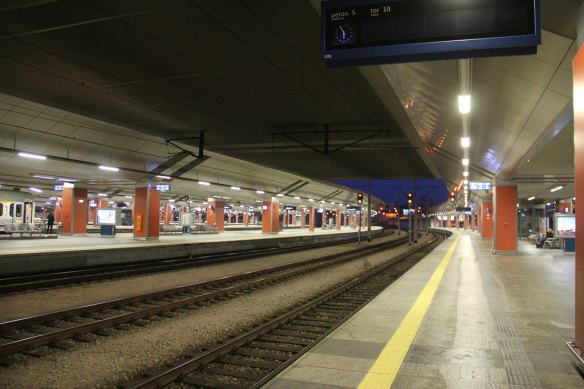 That lonesome whistle – Waiting on a night train at Krakow Glowny

Getting What You Pay For –  Train Games
There was one caveat though. My friend wanted to see if we could change the ticket from a six bed to a two-bed berth. In a spirit of guilt ridden magnanimity I approached a woman at the international ticket window in Krakow Glowny who spoke horrendous English which was matched by her terrible attitude. The only words I was able to understand were her increasingly loud exhalations of “no refund”. My desperate protestations were no match for her willful indifference.  She was too busy waiting to go on break or perhaps she was already on one. I returned to my friend with the sad, but not surprising news that we would still be bunking with four strangers. He recoiled at this idea. I tried to soothe his nerves by uttering a few useless analogies about how “it couldn’t be any worse than the other night” and “what difference does it make how many people are in the compartment, the banging will be just as loud.”

After a period of tense silence and a pensive stare, he said “I am going to see if I can buy us a two-berth compartment.” Back to the window he went. A little while later he came back looking relaxed and holding a ticket for the two of us in our own compartment. I quietly breathed a sigh of relief. At least we could suffer the return trip by ourselves. I offered to pay my share of the ticket. He was so elated by this small victory that he would not hear of it. We did not enter the train until just past 10:00 p.m. on a Wednesday evening. Our compartment seemed a bit roomier than before. That was because the third bunk was not pulled down. In effect, my friend had paid for our berths as well as a vacant one. We both expressed a sense of foreboding as the train began to pull away from the station. I was prepared for another nightmare scenario. Our lone hope was that we were in a different railway car. It was from Hungarian railways, rather than the Polish one we took to Krakow. 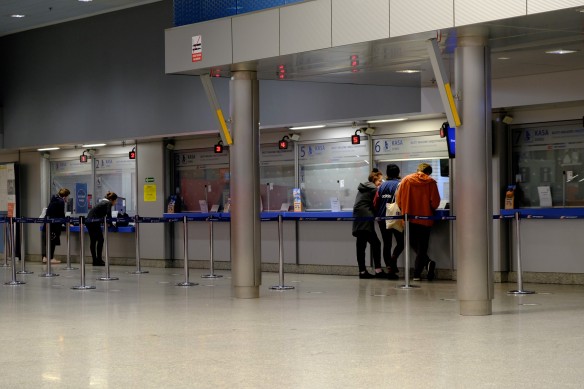 Thief In The Night –  Dreams & Nightmares
Our expectation of cracks, pops and bangs failed to materialize. The first few hours turned out to be a relatively smooth journey. In comparison to our first trip it was a dream, but as the train crossed over into a Moravian countryside cloaked in darkness my apprehension grew. At any moment the train might start belching forth those tortuous noises. I settled my nerves with a special melatonin drink to help me get a few hours of sleep. Soon I was in a trance, followed by a daze and then I fell asleep. Every hour or so I would awake. At one point I felt the train stop and heard voices outside the window. Peeking through a thin curtain I noticed we were in the small city of Breclav, a major railway junction in the Czech Republic which sits close to the Austrian and Slovakian border. I did not see a single potential passenger on the platform, only border guards walking back and forth. It felt like a dream.

A couple of hours before dawn I got up and went to the bathroom. When I reentered the compartment, I failed to fully shut the door. It swung outward and banged against the compartment exterior. I pulled it closed, but forgot to lock it. I then fell into the deepest  sleep I have ever experienced on a train. When I awoke, it was nearly eight a.m. and we were nearing Budapest. I felt totally refreshed from a good night’s rest. The train ride had been close to perfect. I mentioned this to my friend who was already dressed. His reply sent a shock wave through me. “My wallet is gone.” He was frantically searching his pockets, suitcase and the berth. I began to search as well. He had made the mistake of putting it in the netting hanger just above the bed. I had done the same thing on the first trip, but without any problems. I should have known better. 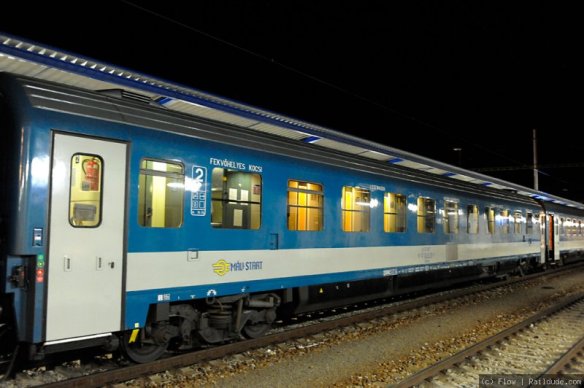 Another night another train – Krakow To Budapest on Hungarian Railways

Relief & Recrimination – Lost & Found
It suddenly struck me that my friend had almost certainly been the victim of theft.
He believed his wallet was stolen when we were both in our bunks that night. My friend had distinctly heard the door to the compartment close loudly. It woke him up. He recalled looking at the door and then at me laying there asleep. This made him wonder if he had imagined it.  Whatever might have happened, one thing was for certain, someone else had entered the room that night. This violation made us suddenly vulnerable, feelings of fear, menace and anger descended on the compartment. Usually reserved and rarely prone to cursing, my friend spewed forth an expletive. We were both approaching crisis mode. I began to wonder what we were going to do.

At least I had my wallet, or did I? I checked my suitcase, unzipping one of the pockets. It was empty. Panic flew straight from my mouth, “My wallet and passport are gone too?” I felt lightheaded and a bit dizzy. My heart was pounding, hands shaking. Frantically I checked another area in my suitcase. That is where I found my wallet and both of our passports. A feeling of instantaneous relief passed through me, followed by guilt and shame. My friend’s wallet was still missing. I was the one who had left the door unlocked. He blamed himself, I blamed myself. None of this did either of us any good. We tried to recall what may have happened. He had gone to the bathroom as well. The theft could have happened while he was out. We both believed it had happened in the last couple of hours while I was fast asleep. He remembered hearing the door shut, I remembered nothing.

Click here for: A Hangover Without A Drop Of Alcohol – That Kind of Night: Budapest to Krakow (Part Two)

Click here for: The Theft Of Innocence – An Attendant Mystery: Krakow to Budapest (Part Four)

2 thoughts on “The Whole Of The Moon – Stolen Hours: Krakow To Budapest (Part Three)”