In early May of 1945, about the same time that Berlin fell to the Red Army, a German prisoner of war by the name of Walter Tolkmitt was brought to the grounds of Balga Castle on the western edge of East Prussia. Tolkmitt, along with 600 others, helped bury hundreds of dead horses now festering in the spring warmth. He later recalled that, “The castle ruin has also lost half the turn and the new castle pitcher is totally burned down. All Kahlholz’s fields were full of debris from vehicles, guns, field kitchens and all kinds of equipment. A wild picture of destruction! Flour, legumes, bread, and even bacon lay around in the fields, so that the villagers did not need to starve for the first time.” The unsettling scene of destruction Tolkmitt witnessed, was the end result of Adolf Hitler and the Nazi’s monstrous ambitions in the East. In a modern crusade for Lebensraum (living space), the Germans had brought the wrath and fury of the Red Army down upon their countrymen and women. The Soviets aimed to annihilate the German presence in the area and keep the region as a prize of war. In the case of Germanic East Prussia annihilation was to precede occupation. This occurred as much after the war as during it. 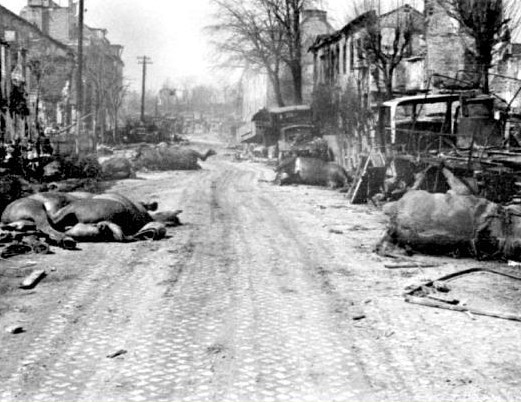 A Wild Picture Of Destruction – East Prussia in 1945

The Merciless Conquest – A Clean Sweep Will Be Made
While Balga Castle was surrounded by dead animals, the fragmented remains of burned out vehicles, spent artillery shells and the flotsam of discarded belongings, the ground was soaked with the blood of German soldiers. In this marsh ridden, swampy soil the bones of some of the Reich’s finest soldiers were forever preserved as grisly artifacts of an apocalyptic fight they had no chance of winning and little of surviving. German soldiers had been outnumbered twenty to one when the campaign in East Prussia began. By the time of those final furious engagements around Balga in late March, the odds against the defenders were exponentially greater. Many fought to the death because the Germans knew what awaited them at the hands of the Soviets, namely a fate just as bad or worse than death. They might be shot or starved, deported and enslaved. The same fate awaited the German civilians who lived in what was about to become the former German province of East Prussia.

The land in which the still smoldering ruins of Balga stood would become part of the new Russian oblast (province) of Kaliningrad, named after one of Josef Stalin’s henchmen, a Communist Party grandee who somehow survived the numerous purges of the Soviet dictator.  Kalinin died in 1946 and received the bizarre honor of having a place he never came close to visiting named after him. One of Stalin’s worst purges was yet to come, but this one would have nothing to do with the Communist Party hierarchy. Instead it would ensnare the Germans of East Prussia. Four years earlier, after Germany launched Operation Barbarossa, Stalin said that East Prussia would eventually be “returned back to Slavdom, where it belongs.” He could not have been more correct. The moment had now arrived when that return was to be affected. Concerning the expulsions, Winston Churchill said, “There will be no mixture of population to cause endless trouble. A clean sweep will be made.” 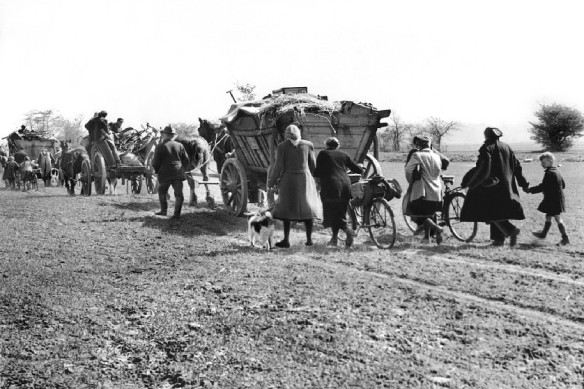 Orderly And Humane – A Matter Of Interpretation
The Potsdam Conference between the victorious Allies called for population transfers of Germans to be done in an “orderly and humane manner”. Those words meant something very different to the Soviet leadership. The Germans were enemies who had been totally defeated, they and anything Germanic in origin would be dealt with on that basis. In the case of East Prussia, part of it was given to Poland, while a strategic wedge was to become Soviet territory. The latter included a swath of shoreline and the adjacent inland territory. The East Prussian capital and culturally rich German city of Konigsberg was part of this arrangement. Other lesser known remnants of the Teutonic legacy such as Balga fell within what Kaliningrad Oblast, a constituent part of the Soviet Union. The dreadful irony of this outcome could not have been lost on the ethnic Germans left in East Prussia. The war in the east had been a bid to expand the frontiers of Germany at the expense of the Soviet Union. Now the opposite was going to happen. The Soviets were going to put an end to Germans in the east. Meanwhile, far away from the high politics and fine print of peace treaties were those stuck on the ground within the old borders. Their fate was sealed.

Germans prisoners such as Tolkmitt were focused on one thing, survival. It is doubtful that he or the hundreds of others forced to work beside him spent much time pondering the ruins of Balga. They did not have time to contemplate history, because they were becoming part of it. A little over seven centuries earlier, the ethnic German Teutonic Knights had taken the wooden fortress of Balga from the Warmians, one of the pagan Prusai tribes (Old Prussians) that had inhabited the area. The Teutonic Knights also took the native Prusai’s land, livelihood and eventually their name. The Prusai were methodically eradicated or assimilated into the newly dominant culture. They did not stand a chance. The conquerors created a new and more permanent culture. Now it was the ancestors of those conquerors who had finally been conquered themselves.

The Way It Used To Be – Konigsberg

Fragments Of A Former World – Vanishing Remains
The nearby village of Balga ceased to exist, the war had all but destroyed it. The ruined walls of the castle had long been uninhabitable and for a time during the prewar era they held a museum. Now those ruins were little more than a lost legacy of an alien culture. The few Germans in this area would soon vanish. Their existence was just as novel as what the little that was left of Balga Castle and even less permanent. The only traces of Teutonic culture on the shores of the East Baltic Sea were ruins such as the ones Tolkmitt noticed on that fateful day. Those ruins were symbolic, not just of a castle or the Teutonic Knights, but of a Germanic presence that was about to be banished forever.

3 thoughts on “A Wild Picture Of Destruction – The Creation Of Kaliningrad: Expulsion Of All Things Germans ”