Lake Bled was just as blessed by history as it was by natural beauty. Bled Castle, towering above the lake’s turbulent waters, stood high on a rocky outcropping. It towered above Aljaz and myself as we made our approach to the main entrance gate. The rocky outcropping on which it stood made the castle stunningly photogenic. More importantly from a historical standpoint, it created a fortress that was nearly impregnable. The approach was lung bursting. Imagine walking up at least a 25% incline on slick cobblestones. My thighs were burning by the halfway point. I consider myself to be in pretty good shape, but I was soon gasping for breath. I could not imagine trying to attack this castle, historically neither could many others. Bled Castle was still standing today in good condition due to the fact that no army could ever really come to terms with how to overcome its natural defenses. It was impossible to conceive of such a conquest. Those who first received rights to the castle were in for the long haul, Bled Castle’s history bore this out. 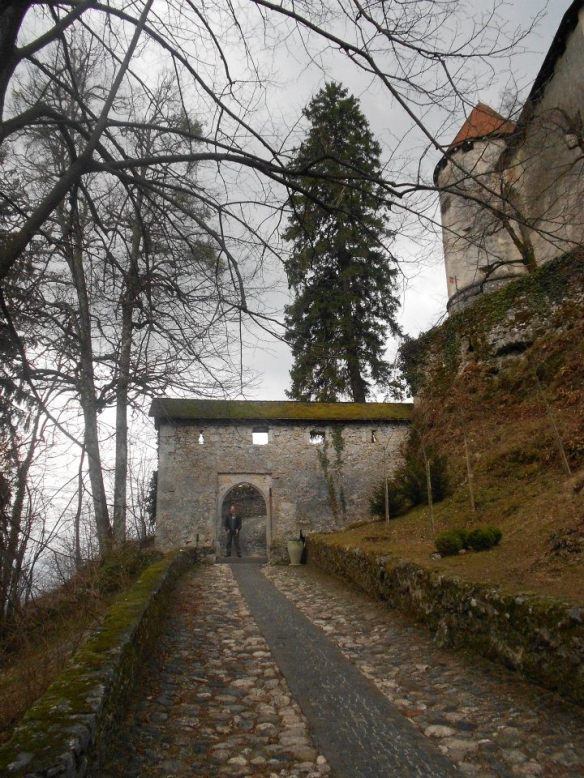 Staying Power – The Bishops of Brixen
One of the joys of travel in Eastern Europe are all the new people, places and events from the past that I get to discover. While this history can seem obscure, upon further examination it often has relevance to modern times. When I first heard “Bishops of Brixen” I thought it had a nice flow to it. Never having heard anything about who or what they were I was curious to learn more. The Bishops of Brixen go all the way back to the start of Bled Castle, over a thousand years ago. They were a group of Catholic Bishops who administered what was known as the Bisphoric of Brixen, an ecclesiastical state that part of the Holy Roman Empire. It was located in what is today the South Tyrol region of Italy. This state was centered around the city of Brixen which can still be visited today. The Bishops of Brixen were given the rights to Bled Castle and the surrounding area by King Henry II (1004 – 1024) of Germany as a reward for their assistance in strengthening German rule in northern Italy.

This was all news to me, as it probably was to almost anyone who visited the castle, other than those who had studied the vagaries of medieval history. The Bishops of Brixen were almost a week’s ride away from Bled Castle. Such trips could be dangerous, if not deadly.  Holding onto the castle meant appointing others to administer it. These included aristocratic leaseholders or land managers. This arrangement worked well enough up until the early modern age. It was not until 1848, with the end of feudalism in the Austrian Empire, that Bled Castle was finally sold off to a wealthy industrialist. Consider the Bishopric of Brixen, which stayed around in one form or another in the Tyrol until 1964. The Bishop’s long lasting rule was helped by the fact that they hardly ruled at all. Instead, they selected managers or leaseholders who took good care of the castle. The formidable position of the castle also helped matters, offering natural protection from enemy attack. With the exception of a peasant uprising, human caused damage was minimal. 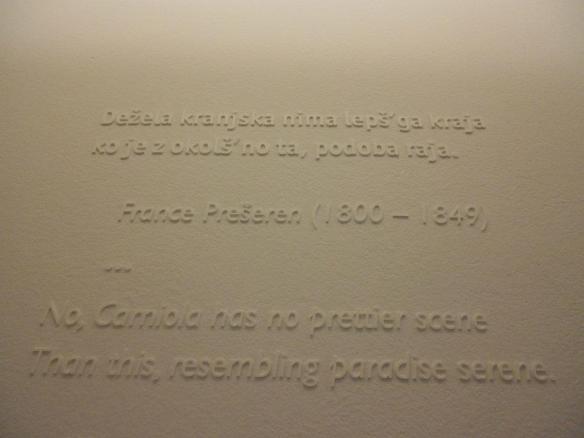 Casting History – In A Different Light
What armies were unable to conquer, nature had a way of undermining. In 1511 an earthquake gravely damaged the castle. Another earthquake in 1690 did more damage, but the castle remained. The two earthquakes led to major reconstruction work which largely created the version of Bled Castle that stands today.  The interior exhibits and rooms did an adequate job of telling the castle’s story. There was a knight’s hall and a chapel to visit, along with the usual assortment of medieval weaponry. Historic furnishings were non-existent, which was no surprise considering the castle’s many temporary residents through the years. Several different architectural styles could be discerned with Romanesque walls, Renaissance outbuildings and the Baroque chapel. The ten Euro entrance fee paid by thousands upon thousands went a long way to keeping the castle in prime condition. The most interesting exhibits related to France Preseren, Slovenia’s national poet.

Preseren’s tumultuous life played out during the first half of the 19th century concurrently with the first stirrings of the Slovenian national awakening. He was a nationalist par excellence, opposing the Austrian grip on power in his homeland. Though Slovenia looked to have more in common with Austria, I was not surprised to find nationalism penetrating the interpretive history of this lakeside redoubt. After all, this was still the Balkans. A hopeless romantic, Preseren was moved by the scenery of Bled. It inspired him to write some of his most famous lines, which included the following verses: “No, Carniola has no prettier scene/Than this, paradise serene”. I wholeheartedly agreed with Preseren’s eloquent assessment. It was rather obvious from the exhibits on Preseren that Slovenia wanted to nationalize the history of the castle. The Bishopric of Brixen, which had profoundly influenced the provenance of the castle for eight centuries, had been a Germanic construct. Now Bled Castle was a possession of the Slovenian state and as such its history was cast in this light.

All Downhill From Here – No Prettier Scene
The castle had looked incredible from a distance, but upon closer inspection I found it not nearly as impressive. Then again, how could it be? Its setting was so dramatic that everything found within the walls paled in comparison to the view looking up at it from the shoreline. There was one exception though, the view out from the castle across Lake Bled. We stood there staring out at its turbulent waters. Clouds and mist intermingled. We could make out the paths of showers by the raindrops scattering onto the dark surface of the lake. It was quite a show. One so stunning, that I could hardly believe such a vista possible. There is the old cliché that seeing is believing, in this case that was not quite true. It was more like seeing is disbelieving. It was almost impossible for me to believe that such an astonishing view could exist. It was worrisome. What could top the combination of standing atop the walls of Bled Castle, looking out on one of the most beautiful lakes in Europe? It was all downhill from Bled Castle literally and figuratively.

Click here for: The Power Of An Overactive Imagination – Caporetto To Kobarid: Where Dreams Go To Thrive