There are two primary objects of touristic affection along the seafront promenade in Constanta, Romania. One of these is the Genoese Lighthouse which makes complete sense in its location looking out towards the Black Sea. The other, Constanta Casino, became a playground for local elites and wealthy visitors to eschew common sense at the gambling table. The latter ironically would come to be viewed as a symbol of the city. While the Lighthouse, a stone sentinel overlooking both promenade and sea, has an enchanting quality all its own. It was built in 1860 as a call back to the days when Genoese ships plied the Black Sea and were guided into port by a lighthouse that stood in the same area.

The lighthouse was among the last structures built during the waning days of Ottoman rule in Constanta, but the impetus for its construction was not Ottoman or Romanian. It was built at the behest of a British owned shipping company, to honor forebears of the shipping industry that had been and would continue to be an integral part of Constanta’s history. By the mid-19th century, Constanta was on the verge of major change. The lighthouse had been constructed at the end of one era and just before the beginning of another. Though highly symbolic, it would soon be usurped by the Casino which was a post-Ottoman phenomena.

A Fresh Light On The Waterfront – View of the Genoese Lighthouse & Constanta Casino (Credit: ZodiacsLion)

Transforming Constanta – Casting A Light On The Future
By the time the Genoese Lighthouse was finished, a new future was approaching Constanta’s stretch of Black Sea shoreline, one that would soon arrive on the same stretch of seafront that the Lighthouse looked out upon. In 1880, the Ottoman presence in Constanta sailed away, never to return. The area was ceded to Romania along with the rest of Dobruja following the Russo-Turkish War and Romanian War of Independence. Almost immediately, the port and surrounding city began to be transformed. The new Constanta would boom with its port acting as a transit facility for Romania’s bountiful grain exports. The city would grow richer than ever before from this trade. The new Constanta would be immortalized in the Casino, which was located just 150 meters southwest of the lighthouse. It was the first structure built in Constanta after it became part of Romania.

The casino was a building altogether different from the Genoese Lighthouse. It was forward facing, not just looking out on the Black Sea, but also into the future. This new building represented wealth and refined decadence. It was a harbinger of an age that would weld aristocracy and money, tradition and capitalism together. This building was known as the Casino and its first version was one of three to come. Each proving to be a triumph in its own way. The stunningly grand and spectacularly worn exterior of the Constanta Casino that visitors see slowly deteriorating along the promenade today is nothing like the first version of the casino constructed upon what was a small undeveloped promontory in the late 19th century. Rather than the spectacle of stone which stands in its place today, the first casino was built out of wood. 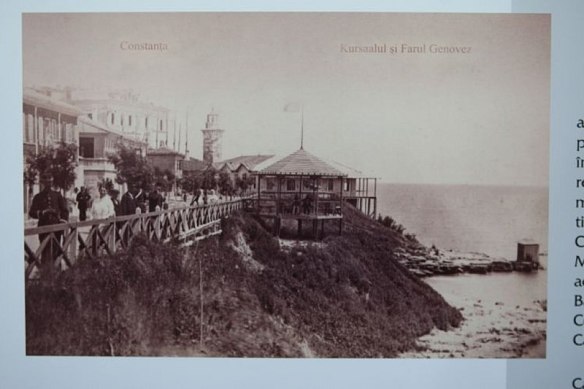 On The Edge of The Black Sea – First Version of the Constanta Casino (Credit: ZodiacsLion)

High Stakes & High Brow – Fun Loving Fashionables
Known as the Cazin Kursaal (German for public hall) the initial version of the casino stood on a much more precarious spot, literally clinging to a slope which descended into the sea. The design featured twin terraces, overlapping with one another to provide views of both harbor and seafront. This was a favorite haunt of sightseers and sunbathers. The largest space within the interior was home to a ballroom where dances and theatrical performances were held. There were also a couple of rooms where gambling took place. The casino mixed high stakes with the high brow. Reading rooms offered visitors a window on the world as well as the sea. Both national and international press were available for the more intellectually minded. Unfortunately, the building’s precarious positioning also played a part in its destruction when in late 1891 a nasty storm tore the roof apart and caused irreparable damage to the exterior. The city decided that a wholesale repair was out of the question. In January 1892, this first version of the casino was demolished.

By this time, the casino had become something of a Constanta institution, thus it was decided to build a new version as quickly as possible. The second version of the casino was built on a more stable spot than the first, a location that would later be used by the structure which still stands there today. The second casino’s construction was completed rather quickly and opened to visitors in 1893. While this was a boon for the fun loving fashionables who frolicked in Constanta, the second version of the Casino, known as the Cazin, failed to be as aesthetically pleasing as the first. It only sported a single terrace out towards the sea. Though of more stout construction, it too was built of wood. While most casinos in Europe were built of more lasting materials such as stone and mortar which had staying power, Constanta’s was more down at the heel, a functional structure decidedly lacking in all the glittering amenities required by the elite of a fast modernizing port city. It was soon decided that an entirely new casino would be built, one befitting a city of its size and wealth.

The Creation to Come – Final Version of the Constanta Casino (Credit: Diego Delso)

An Inspired Choice – Controversial From The Start
The newest and what would become the final version of Constanta’s casino would be immortalized in stone. It was both built to last and catch the eye. The architect Daniel Renard had grand ideas and even grander designs as he set out to create an iconic example of Romanian Art Nouveau. Renard had been educated in Paris, as such he had been inspired by the French flair for design and was an inspired choice for chief architect. The city’s power brokers wanted a building that would evoke the casinos found along the French Rivera, for this was to be a symbol of wealth and prestige. Thus, non-lasting wooden materials were out, while stone, glass and grandeur were favored. The design was controversial from the start.

The Romanian liberals held power when Renard began his work. They loved the fact that Renard was pushing the limits with his design, but when conservatives took power two years later, they replaced Renard with an architect who planned a more traditionally styled structure. Then another change of government brought the Liberals back into power. Renard returned to favor, assuming his original post. He would now be able to finish his fantastically eclectic design which was soon to become the most glorious building in Romania.