Anytime there is a hurricane, tornado or blizzard in the United States, my Hungarian wife never fails to remind me of the genteel climate in her homeland and the greater region surrounding it. In her eyes, the United States is a land of climatic extremes, with life threatening weather and natural disasters an all too common occurrence. I often remind her that before the Danube and Tisza Rivers were tamed both were prone to catastrophic flooding. Budapest in 1838 and Szeged in 1879 sustained horrendous damage from unprecedented inundations. As for tornadoes, I have never seen or heard of one in Hungary or Eastern Europe. And since winter is not what it used to be in the region, blizzards have become a rare occurrence. Thus, I must admit that there is a great amount of truth in her opinion. The United States is buffeted on an annual basis by a variety of catastrophic weather. Nonetheless, Eastern Europe is not exactly blessed with peaceful and serene nature either. Natural disasters have been known to strike there, in some countries more than others.

When I think of earthquakes my mind usually gravitates towards those places that always seem to make the news. These include the San Andreas Fault in California, in addition to the highly unstable Pacific Rim where Japan and Indonesia suffer deadly earthquakes on a recurring basis. One place I have never really thought of is Eastern Europe, specifically Hungary. It is worth mentioning that prior to my first trip there in 2011, I was surprised to hear that things had gotten a bit shaky. A 4.3 magnitude earthquake struck the Budapest region causing some minor cracks in a few buildings. Besides shaking up the locals, the earthquake was pretty much forgettable. The truth is that most earthquakes in Hungary are unlikely to make many seismic waves. The most powerful one to ever strike the country happened all the way back in 1763 at Komarom in northern Hungary. The 6.5 temblor damaged many of the city’s buildings and caused some casualties. Yet, by the standards of earthquakes, it was relatively modest in size and scale.  Furthermore, this earthquake was not a precursor of greater tremors to come. Contrast the earthquake situation in Hungary with that of its eastern neighbor, Romania. Only then, does a totally different situation emerge. 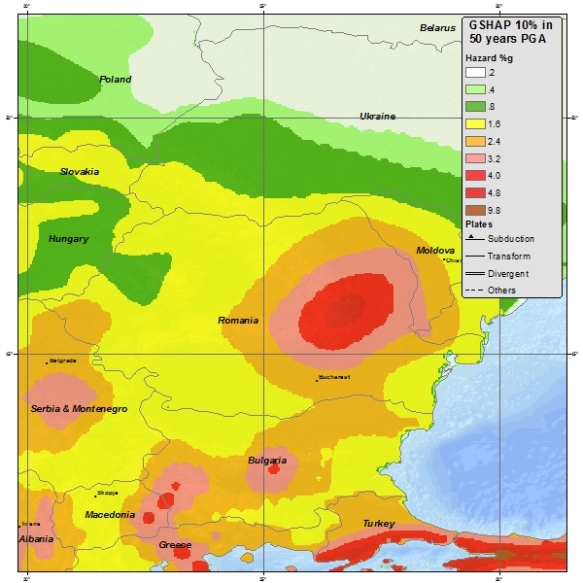 On Shaky Ground – All That It Is Cracked Up To Be
During the 20th century, Romania suffered from a litany of woes. two World Wars, interethnic strife, corruption on a colossal scale and the depraved dictatorship of Nicolae Ceaucescu. The last thing the country needed during this time was any kind of natural disaster. On more than one occasion, that is exactly what they got. Romania may not be a widely known seismic hotspot, but it has one of the most seismically active areas in the world, known as the Vrancea zone which is centered in mountains to the north of Bucharest. Unfortunately, that zone includes Bucharest, the nation’s most populated city and Romania’s capital. Five times during the 20th century, earthquakes measuring 7.0 or greater on the Richter Scale took place in Romania. All but one of these occurred in the Vrancea zone.

Earthquakes cannot be predicted with any amount of precision, but future ones are almost certain to occur in places where they have struck numerous times before. By such extrapolation, it is almost a certainty that Romanians living anywhere around or near the Vrancea zone will experience many more earthquakes. It is not just the incidence of earthquakes in the zone which makes them worrisome, but also their overwhelming power. Between 1802 and 1986 there were no less than eight earthquakes emanating from the zone that measured 7.0 or greater on the Richer Scale. That is an average of one massively destructive earthquake every 23 years. Now consider the following, there has been no earthquake approaching this standard since 1986. That was 32 years ago. By the law of averages, Romania is overdue for another one any day.

Red Alerts – Hope For The Best, Expect The Worst
While there are several cities located close to the Vrancea Zone, none is as large or as important as Bucharest. Judging by past experiences, the next big earthquake is likely to cause outsized damage in the capital. Because of this threat, many risk management experts have deemed Bucharest the most dangerous European capital to live in. Ominous signs of potential calamity can be found all over the city center if a keen-eyed observer knows what to look for. Many of the old, grandiloquent late 19th and early 20th century apartment blocks have red circles attached to them. These plaques are part of a program that was instituted by city authorities in the 1990’s to identify buildings which were at risk of collapse if an earthquake of 7.0 magnitude or greater were to hit the city again.

Rents in these structurally deficient buildings are a good deal cheaper than elsewhere in the city center. With property prices in the area soaring, many renters have thrown caution to the wind and hope their luck holds. The odds are against them. As part of the identification program, zero interest loans were offered to residents of these buildings. The hope was that they would take it upon themselves to fix structural weaknesses. Few have taken up the offer. Major repairs still need to be made, but most likely that will never happen. The biggest effect of the red placard program was that it ended up reducing rent in many decrepit buildings and their value as well. Residents have roundly rejected the program and very few buildings have been labeled with the warning signs over the past two decades.

Structural Faults – Life In The Vrancea Zone
Of the 400 buildings that were identified as in danger of collapse, most of these were severely weakened by the 1977 and 1986 earthquakes which killed and injured thousands while causing billions of dollars in damages. Hundreds of thousands still have living memories of these catastrophes. Nonetheless, few have the time, inclination or resources to take the steps necessary to shore up their building’s structural faults. Bucharest’s citizens hope the day of reckoning never arrives though many of them know better. The next big earthquake is just a moment, a day or decade away. Such is life in the Vrancea Zone.

Click here for: The Bells That Tolled – The 1802 Vrancea Earthquake: Bucharest Buckles Under (Part Two)