Transylvanianism is the kind of quixotic word that sounds like something related to paranormal activity. After first seeing the word my imagination began to run wild with a plethora of bizarre suppositions concerning just what it might mean. Perhaps it was an academic pursuit where all things Transylvania would be examined in detail and the studious sort could procure an undergraduate degree in “the land beyond the forest” (the root word’s literal meaning). Or maybe the word was some sort of strange affliction caused by contact with mysterious counts who double as vampires on the night shift. Another idea was that the word stood for a populist political movement to make Transylvania an independent nation. It turned out that all my theories were wrong. The word was an idea, unique to its time. This idea was largely the brainchild of a famous ethnic Hungarian architect, Karoly Kos (Kos Karoly in the Hungarian order of names) and came about after Hungary’s borders were trimmed to exclude Transylvania following the First World War.

Transylvanianism was controversial at the time because its basis involved an acceptance of Romanian rule over Transylvania. Kos believed that ethnic Hungarians should work within the existing system to promote their interests, rather than call for the old borders to be reinstituted. While Kos’ idea is now largely part of the past, his legacy lives on in an unlikely architectural project. Kos helped construct a little bit of Transylvania in an area that is now part of Hungary’s capital city. This physical representation is something that can still be seen and enjoyed in one of the least visited areas of Budapest. The fact that it stands hundreds of kilometers west of Kos’ beloved Transylvania, makes it that much more fascinating.

Beyond all expectations – Transylvania by way of Kispest (Credit: toldym)

Opposites Connect – A Splendid Outlier In Budapest
I first discovered Transylvania not in the dark forests of the Apuseni Mountains or among the craggy peaks of the Fagaras, instead I found it confronting me in Kispest, the gritty 19th district of Budapest. Kispest is just about the last place one would expect to be reminded of Transylvania. The district is working class to its core. The resident’s faces are as cracked as its sidewalks. This is a place that has more in common with the 1980’s than the 21st century. The apartment blocks are aging badly, there is a sheen of grime coating anything related to public transport and the citizens have a perpetually dour look frozen on their faces. In other words, Kispest is a place serious about its decrepitude. Scratch beneath the surface though and glimmers of post-communist Hungary soon become apparent. There are fine middle-class homes, shiny car dealerships and a shopping mall that pulses to the rhythms of consumerism and mass consumption.

And then there is the Wekerle Estate (Wekerletelep – named for two-time Hungarian Prime Minister Sandor Wekerle whose government supported its construction). On the surface, such words as Kispest and estate would seem to not have anything in common, but here they do. That is one reason the Wekerle Estate is worth a look. Opposites have not so much attracted, as they have connected here. The Estate stands as a splendid outlier amid the wasted vestiges of the old proletarian ideals that were swept away before the tide of history in 1989. At the Wekerle estate one can find what Kispest could have been, rather than what it was turned into. The estate is a place where style and substance are combined to create a towering achievement no more than three stories high and all the better for it. The scale matters less than a certain sensibility that pervade this remarkable place. The Wekerle Estate consists of 1,007 houses containing over 4,400 apartments. All have an architecturally communal tinge with stylistic elements of Art Nouveau and above all Transylvanian. 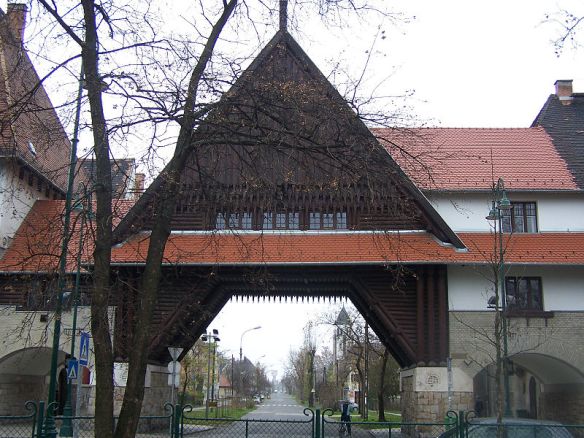 Style & substance – Gate into the heart of the Wekerle Estate (Credit: rlevente)

A Garden City– Grown With Folkore
Imagine a village hidden among the urban, a garden city grown to guard against the excesses of modernity, folk architecture blended with domestic living space. The architectural style on offer at the Wekerle Estate emphasizes sharp angles, gables and turrets. An aesthetic appealing slice of Transylvania. The estate was the work of as many as fifteen different architects and engineers with Kos playing the lead role. Construction started prior to the outbreak of World War I and continued up to the mid-1920’s. At that time there was no longer money to complete this vision of Transylvania sprouting up on the fringes of Budapest. Kos is the man most associated with the estate, as he should be since it was his vision which lay at its core. Kos Karoly Square is an oasis of nature surrounded by exquisitely folk inspired structures. Beyond the square, tree-lined streets radiate outward. These streets are lined with dwellings that represent the same inspired style. The development could house up to 20,000 people.

Everything in the Estate was built with the goal of creating an agreeable living space, where people could live in the city, but feel as though they were still in a village. This was of particular interest to the tens of thousands who had moved to Budapest from the countryside in the late 19th and early 20th century. During this period, Hungary was transformed from a rural to a predominantly urban society. The hope was that the Wekerle estate would help these economic migrants keep a connection to the land and also their fellow man. Here was an idea of the communal and collective without the loss of individuality. At the same time, the Wekerle estate represented a physical embodiment of Transylvania. And Karoly Kos was the greatest exponent of that place as an aesthetic ideal.

Living Legacy – An Idea Ahead Of Its Time
At the center of the Wekerle Estate stands Kos Karoly Square and at the center of the Square stands a statue of the man himself. It is a fitting tribute to his legacy. Kos would live out his life in Kolozsvar (Cluj in present day Romania), the largest city and cultural capital of Transylvania. He worked hard to advance the idea of Transylvanianism throughout the 1920’s and 30’s. This policy of moderation was not in tune with the Hungarian desire to recover the prewar Kingdom of Hungary’s “lost lands”. Living in peaceful coexistence with Romanians meant more to Kos than going to war, but hotter heads prevailed. Northern Transylvania was re-occupied by Hungary through an alliance with Nazi Germany, but that alliance led to greater losses, including Transylvania forever. Oddly enough though Kos died in 1977, his ideal of peaceful coexistence has been largely realized in Transylvania as part of a different entity, the European Union. In that respect his legacy lives on, just as it does at the Wekerle Estate in Kispest.

Click here for: A Dazzling Island In The Sky – Castle Hill In Buda (For The Love of Hungary – Part 4)