Walking up the steps to enter Ataturk’s birthplace I wondered exactly what I would find inside. Since the house was a place of pilgrimage for tens of thousands of Turks each year, an aura of reverence was to be expected. The rooms contained exhibits laying out the early life and later accomplishments of perhaps the most indispensable leader to a single nation’s creation and resulting development during the 20th century. Such a statement sounds like hyperbole, but there is no way to overstate Mustafa Kemal Ataturk’s centrality to the nation of Turkey, past, present and future. He is adored by Turks with a devotion usually reserved for religious figures. The cult of Ataturk is alive in the country and from what I saw, outside of it as well. The museum at Ataturk’s birthplace emphasized his greatness, but it also left me with the impression that it was as much about paying homage as it was honoring history. 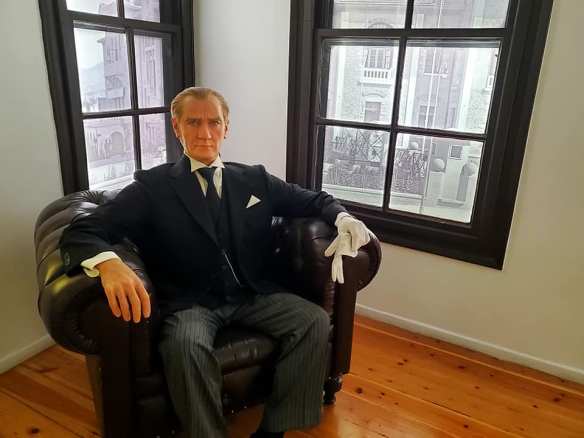 A mythical figure – The man who created Modern Turkey

It was difficult to get a grasp on Ataturk’s early childhood from the museum. Much of that had to do with the lack of original furnishings. This was understandable. No one could have foreseen just how famous Ataturk would later become or that the city of his birth would end up as part of Greece. In truth, it was something of a miracle that the house survived at all. The family never owned it, only renting the home. After his father’s death, the seven year old Mustafa (Ataturk’s given name at birth), his mother and sister moved from the house to one adjacent to it. (Some sources state that he was born in another house) Mustafa would eventually move away, while his mother and sister continued to live in the city until the Greeks took over from the Ottomans in 1912. They fled, along with 15,000 other Muslim refugees, to Istanbul. The birthplace house was bought by a Greek family, but the Greek government eventually recovered it. They gifted it to Turkey as a symbol of friendship between the two formerly warring nations.

A Mythical Figure – Sharp Dressed Man
The house also managed to survive one cataclysmic fire, two world wars and a slew of earthquakes that remade the cityscape of Thessaloniki (Selanik when Ataturk was born). By fate or fortune, Ataturk’s birthplace escaped the wrath of history. In a sense, the birthplace’s longevity mirrored Ataturk’s own life. Through one maelstrom after another, both emerged unscathed with their images intact. A pristine image of Ataturk was certainly portrayed by the museum. That image was most prominently on display in an uncanny wax figure of Ataturk sitting in a chair, staring intently into the distance, looking like a statesman on a mission. He was immaculately attired, just as he was in life. Among the more pronounced effects of the European culture Ataturk imbibed in Thessaloniki was a penchant for sharp dressing in tailored suits. He abhorred traditional Ottoman dress his entire life.

The wax portrayal of Ataturk was eerily lifelike. To the point that I felt at any moment Ataturk might shift his eyes directly toward mine. Instead he looked right through me, with a gaze of intensity and ambition that demanded respect and reverence. He looked to be the kind of man who can stare right into someone else’s soul. I had seen this pose from Ataturk in historic photographs. While visiting Turkey several years before, I bought a photo of this same likeness. In both the image and wax portrayal there was no hint of a blemish or flaw about the man. Here was the essential Ataturk, strong, determined, radiating confidence and subtle ferocity. There was no hint of the drinking habit that ended his remarkable life at the age of 57. Ataturk was more myth than man in this museum. For that matter, I began to wonder where his younger self was in these rooms. Perhaps hiding somewhere in the shadows cast by his legend and legacy.

A Child’s Game – Consider The Source
The museum did a good job of telling the story of Ataturk’s hometown, his family, the early part of his life and giving a feel for what he stood for. I went into the room where he was likely born. I say likely, because no one really knows for sure. There is not even an agreed upon date for his birth. Ataturk stated that his mother told him he was born in the spring. Scholarly historians have not been able to confirm a specific date, but the best guess is that he was born during the winter of 1881. Does it matter? Not really, except for the fact that so much of Ataturk’s life has become obscured by myth that the truth has become difficult to discern, especially regarding the earliest years of his life. Ataturk and those around him encouraged this sort of manufactured history, a milder version of the cult of personality that is so often cultivated by authoritarian governments. The truth about Ataturk’s early life is either pristine (museum version) or fuzzy (biographies). The difference between fact and fiction is often undetectable. Where there is a vacuum of information, Turks have filled it with reverence. While historians have filled it with their own interpretations.

Man of Action – Words from Ataturk

It felt strange walking around the house. The exhibits were excellent, but they could not replace the lack of authenticity. The house did not look or feel anything like the late 19th century. This made it hard to get a grasp on Ataturk’s early years. Instead, the museum’s interpretation was less about perspective and more about retrospective. Here was Ataturk without flaws, a man of incomparable achievements. There was soothing Turkish music that set a mood of relaxation. I could have stood in those room for hours listening to that music. I lingered longer than usual. Everything was pleasing. There was no struggle, no ambiguity, the wars, personal and political had been fought and won in clinical fashion. The toil and terrible suffering Ataturk must have seen in his lifetime was worth a few paragraphs. As for the young Mustafa reared within these walls, he was to remain a stranger. The childhood experiences that influenced his later life would remain a mystery, forever.

Click here for: The First After The First – Thessaloniki in Byzantium: A Distant Second (Part Nine)