Most of what is known about European History in the Renaissance era comes from written sources. If an event or incident was documented in writing than it became part of the historical record. If something was not written down, then it might as well have never happened. For many events, the ending is much more well-known than the beginning. Finding an exact starting point for an event can be an exercise in futility. Chroniclers were most likely to document a significant event after it occurred, not at its very beginning. The historical importance of an event is rarely known until it is already in progress or after its conclusion. This is the case with a sensational murder committed by Don Julius Caesar d’Austria, the son of Holy Roman Emperor Rudolf II. Due to the efforts of Cesky Krumlov’s chronicler Vaclav Brezan we know the details of how Don Julius’ most notorious affair ended. Just exactly how it started is open to speculation and relies on generalization rather than specifics. Nonetheless, the beginning of this most sadistic of affairs is open to the imagination. This makes what occurred even more terrible to contemplate.

At The Mercy Of A Madman – Bound By Fate
In the year 1607, Don Julius had been placed in a pseudo-exile at Cesky Krumlov by his father Rudolf II. He took up residence at the magnificent castle that loomed over the town. From there, Don Julius could look down from his quarters at the citizenry of Cesky Krumlov. He would see hundreds of innocents – potential prey for him – going about their business with little knowledge of the fate that would soon befall one of them. Despite his crazed mania, Don Julius was so powerful that to displace him would have taken an act of his father, who had installed him at Cesky Krumlov in the first place. This was not about to happen despite the schizophrenic madness which plagued Don Julius. Like the most powerful royalty of that age, he held the power of life and death over many people. They were at his mercy, a precarious and soon to be deadly position for one of them.

Exactly when and how Don Julius Caesar d’Austria first met Marketa Pichlerova, the daughter of a local barber in Cesky Krumlov, is open to question. Was it during one of his drunken rampages? While passing though the town with his entourage of misfits? Or just by happenstance? No one can say for sure, but the questions do not end there. What was it about Marketa that caused Don Julius to become obsessed with her? He had attacked and sexually assaulted many women in his life up to that time, but he usually moved on from one conquest to the next. That would not be the case with Marketa. Perhaps it had something to do with their initial encounter. What is known, Marketa’s father Zikmund was using his barbering skills to “bleed” Don Julius. Just the type of useless medical treatment that was going to do nothing for Don Julius’ overwhelming mental problems other than exacerbate them. Somewhere in that mad mind of his clouded by schizophrenia, Don Julius must have fallen for Marketa. The reason will never be known, unlike the outcome. Whether brought together by luck or chance, they would be bound forever together by fate. 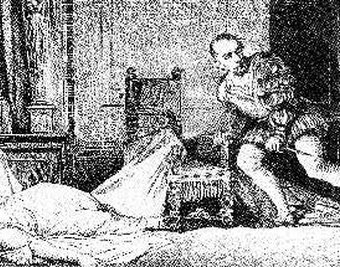 The First & Final Cuts – A Lethal Bloodletting
Don Julius chose Marketa as a pseudo-consort/concubine. Her parents allowed Marketa to move into the castle with him. This was quite a step up in society for Marketa. She went from being the daughter of a humble barber to the wife of the Habsburg Emperor’s oldest son. Conversely, she had also become the virtual prisoner of a debauched degenerate who was descending ever deeper into the throes of madness. Marketa would soon realize this for herself. When Don Julius grew weary of her, rather than send Marketa back home to her parents he instead acted out his violent impulses upon her. A fight between the couple escalated into a near lethal bloodletting. Don Julius attacked her with a rapier. He managed to stab her several times, then proceeded to fling her out of a castle window to what he surely supposed would be her death. Rather than perish, Marketa instead landed on a trash heap which saved her life for the time being.

Once Don Julius discovered that Marketa had survived, he demanded that her parents turn her back over to him. They refused. This led Don Julius to imprison her father for over a month. He sadistically tortured Zikmund and threatened to kill him. Marketa’s mother finally gave in to this insidious blackmail. She offered to allow Marketa to return if her husband was freed. This was done on Sunday, February 17th. A day later Don Julius exacted revenge in a fit of ultraviolent anger. According to chronicler Vaclav Brezin, “Julius, that awful tyrant and devil, bastard of the Emperor, did an incredibly terrible thing to his bed partner, the daughter of a barber, when he cut off her head and other parts of her body, and people had to put her into her coffin in single pieces.” Eyewitnesses reported that they found Don Julius covered in blood, guts and feces. Even by the standards of that time, the crime was shocking in the extreme. Rudolf II was scandalized by his son’s crime. He vowed that Don Julius would never go free again.

Disturbing Truths – The Last Days Of Don Julius
While Don Julius avoided capital punishment – almost certainly due to his lineage – he still suffered massive anguish. His mental state had deteriorated to such an extent that he began living more like an animal than a human being. His personal hygiene eroded to the point that he would not bathe or take care of himself at all. Servants were so fearful of Don Julius that they avoided him. The rancid smell coming from his quarters was overpowering and only grew worse with time. He took to laying in the floor naked while using his soiled clothing for bedding. His health declined precipitately. It was reported that in the days before his death he let out full throated howls. The bellowing finally stopped on June 25, 1809 when Don Julius died of a ruptured ulcer. He was interred at the Minorite monastery in Cesky Krumlov.

Rudolf II once again turned tender hearted. His wish was to have Don Julius moved to a burial site more worthy of an heir to the emperor. Before this could happen Rudolf died. Don Julius’ remains were later moved to another area of the monastery. He is said to be buried somewhere within the walls. The exact place is not known. If only those walls could talk, they would howl in derision. Don Julius Caesar d’Austria was a deeply troubled man who was destined for a very bad end. His schizophrenia was uncontrollable. His father could only do so much to protect him, but no one could protect Don Julius from himself. Tragically, the innocent Marketa suffered a horrible death due to his madness. It is impossible to know what exactly drew Don Julius to Marketa. Just as it is impossible to know the exact place he is buried. Some things can never be known and that is probably for the best. The truth is disturbing enough on its own.