Following our guided tour of the museum we arrived back at the entrance. Another guide then approached us, energetic, smiling and ready to accompany us to The Cairn of Peace Memorial (Pamatnik Mohlya miru). Looking outside at the torrent of snow continuing to fall, I wondered if this was such a good idea. We had a long drive ahead of us. After our visit we were planning to drive all the way back to eastern Hungary that same day if possible. The drive was going to be especially difficult considering the weather conditions. Nonetheless, we decided that after all we had driven through just to get here, a raging snowstorm was not going to stop us from visiting the Memorial. Thus, we set off with our guide to storm Pratzen Heights, not under a hail of bullets and shellfire as happened at the battle, but through a blinding storm of snowflakes.

War & Peace In Winter – The Cairn of Peace Memorial

Europe’s First Peace Monument – On The Verge Of War
For many of the 70,000 annual visitors to the Austerlitz battlefield, the Cairn of Peace Memorial is the main attraction. This is understandable since the Memorial is a tangible object, but it has little to do with the battle at the time it occurred or its aftermath. Instead, the Cairn was constructed over a century after the battle was fought. The memorial’s history is fascinating in and of itself, some of this history has little to do with the Battle of Austerlitz and more with a movement led by a pacifist priest and school teacher by the name of Alois Slovak. The idea for a peace memorial, which would be the first in European history, came from Slovak and his closest friends. The Austerlitz battlefield offered the proper location and context for this to take place. Nevertheless, the distance in time between the actual battle and the memorial’s construction left me wondering about its historical importance. Did it really have anything to do with Austerlitz? How could a manmade monument built in the early 20th century pay homage to those who lost their lives in that bloody battle? Those same questions must have been on the minds of those who decided to create the Memorial.

The fact that it was partly funded by public subscription likely influenced its main theme, a memorial dedicated to everyone who had died due to the battle. This was not limited to the warring armies. The memorial was also dedicated to all the civilians that perished. There were many who lived on or around the battlefield that were killed in the crossfire. It is an interesting concept because the area was largely populated by Moravians, who are ethnically Czech. Only a very small percentage of the Austrian Army that fought at Austerlitz consisted of Czechs. I asked our Czech guide about how the people of his nation felt about the battle. After all, it was largely someone’s else history. He said that Czech visitors to the battlefield were fewer than foreigners since “it does not have much to do with them.” While the battle was of great importance to European history, it ironically had little to do with the Czechs who lived in the area at that time. Thus, it is hardly surprising that French, Russians, Austrians and other European nationalities make up most of the visitors today, just as they made up most of the battle’s combatants in 1805.

Shield Bearer – One of four commemorative plaques on The Cairn Of Peace Memorial (Credit: Pudelek)

Fighting For Peace – Losing A Lost Cause
After a short walk through a bombardment of wet snowflakes we found ourselves standing outside the memorial’s entrance way. In front and above us stood the Art Nouveau creation of noted Czech architect Josef Fanta. The pyramidal shaped memorial is topped by an ellipsoid shaped planet earth inset with a Slavonic Cross, a symbol of redemption. The message meant to be communicated by the memorial is summed up in the explanatory quote, “The Cairn of Peace fights on the battlefield of the world for world peace.” In other words, the monument stands in opposition to warfare. This was a battle the memorial and those who advocated for it were destined to lose. The three governments – Austria-Hungary, France and Russia – who provided a good bit of the funding to construct the memorial were certainly not living up to peaceful ideals at the time. On the contrary, they were involved in an arms race that was about to turn lethal.

Construction of the Cairn of Peace took place in the years prior to World War One. In the darkest of ironies, the memorial’s dedication was to take place during the summer of 1914. The dedication was delayed by almost a decade due to the outbreak of hostilities.  By the time the First World War ended, Austria-Hungary and Tsarist Russia had vanished into nonexistence. The memorial now stood on the territory of the newly formed nation of Czechoslovakia. As such the Czechs had a say in its reinterpretation. A series of four plaques were later added below the ellipsoid, one of these displays a quote by Czechoslovakia’s founder and first president, Thomas Masryk, “not by the sword, but by the plough.” Tragically, these words were of little use when the Second World War brought more conflict to this intensely agricultural land. In the first three decades after the Cairn of Peace was constructed, Europe engaged in the two most deadly wars in human history. 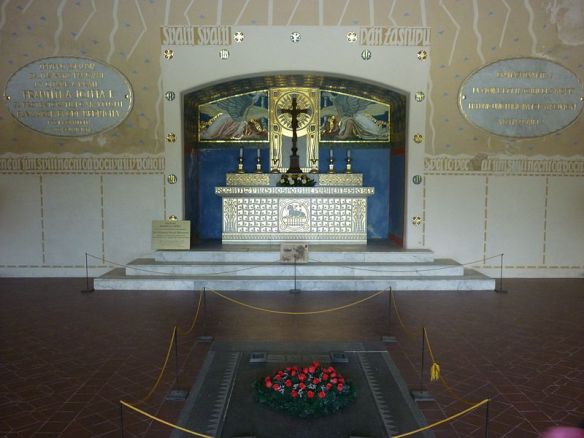 The Legacy of Austerlitz – Inside The Cairn of Peace Memorial (Credit: Fejsinek)

Bound By Austerlitz – Descending From The Heights
Entering the memorial was a somber experience. The square shaped chapel with its excellent acoustics magnified the guide’s voice. He politely explained that beneath a marble slab set in the floor was an ossuary containing thousands of bones. These remains were found scattered across the Austerlitz Battlefield. They were gathered together inside the memorial and placed in this common tomb. The remains include soldiers from all the opposing armies, along with innocent civilians. Archaeological research has proven that they came from a variety of ethnicities and backgrounds. French, Austrians, Russians and Czechs, soldiers and peasants, male and female. That which divided them in life no longer matters, now and forever they are bound together in burial beneath The Cairn of Peace. This is the greatest and most enduring legacy of the Battle of Austerlitz.

Click here for: A Recurrent Madness – The Meaning of Breclav (A Czech Winter’s Journey: Part Twenty-four)