The Seskotai to Warsaw portion of the train trip turned out to be a delightful journey. I had the Welsh couple to keep me company while the train rolled through the gorgeous countryside of northeastern Poland. It was at the height of autumn. The forests were illuminated with fall foliage, while the ponds and lakes which dotted the area shimmered in the afternoon sunlight. The Welsh couple I had met on the platform at Seskotai, consisted of a strikingly attractive, middle aged red-headed woman who worked some sort of office job close to Cardiff, while her stocky husband ran the farm they owned together. Both of them were pleasant and talkative, unless the subject turned to the English, whom they found particularly distasteful. If anything was wrong in Britain, then it was an Englishman’s fault according to them.

Their attitude had much in common with Eastern Europeans from small and medium sized nations that had suffered at the hands of much larger foes. As the English were to the Welsh, so the Poles were to the Lithuanians or the Germans and Russians were to the Poles. The couple were frequent travelers to Eastern Europe, coming to watch horse races each year in Brno, the Czech Republic’s second city. On these same trips they made time to visit other places in the region. They were now heading towards Brno to watch the races starting in a couple of days. The husband studied the rolling landscape with the eye of a farmer. He noted the many fallow fields, remarking that these could easily be cultivated. The Poles were leaving money in the earth. The lack of development in this region made its nature more spectacular.  The forests, fields and ponds literally glowed beneath a radiant, late afternoon splash of sunshine. 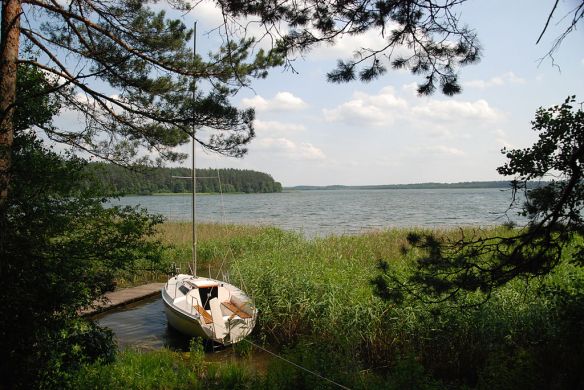 A Most Important Unknown Place– Strategic Suwalki
I was entranced by the serene and pristine nature. This was matched by my fascination with the area’s history. Despite its beauty, I knew that this land had been fiercely contested by Poles, Lithuanians, Prussians and Russians for many centuries. The geopolitical situation had stabilized since the collapse of the Soviet Union, but could flare up at any time. Half an hour after crossing the Polish border, the train made a stop in Suwalki. Suwalki was not only close on the Lithuanian border, but to its north could be found the Russian exclave of Kaliningrad and to the south, Belarus. Nations that were to be feared rather than trusted.  The area was just as strategically important today as it had been during the first half of the 20th century. The flat narrow strip of land I was traveling through was a highly strategic security corridor for the European Union and NATO alliance.

Known as the Suwalki Gap, the only place the Baltic States border the rest of NATO. It is through this gap, that NATO troops would have to travel if they had to defend the Baltic States from a Russian attack. Conversely, Russia could sever NATO’s connections with Lithuania, Latvia and Estonia by closing off the gap by moving troops and armor into it. This land pockmarked with lakes and dark forests, rolling fields and rural farmsteads has not changed much over the centuries, either physically or geopolitically. Rumbling through it on a Polish train gave little hint as to its true importance to European and world peace. It was hard to imagine that a land hardly anyone knows, visits or cares about could become the setting for another World War.

A Primeval World – Beauty & The Beast
After Suwalki the next stop was Augustow, one of those places that was in the wrong place at the wrong time multiple times from 1914 to 1945. The First and Second Battles of The Masurian Lakes brought the German and Russian armies here in the fall of 1914 and winter of 1915. Polish and Lithuanian forces fought the Battle of Augustow around the area in 1920. Then during World War II it experienced multiple occupations, deportations and exterminations. Ethnic Poles were deported to Kazakhstan by the Soviets, the Jewish community was wiped out by the Nazis and the Soviets rounded up Polish Home Army members at the end of the war. As for the physical infrastructure of Augustow, seven out of every ten buildings were destroyed. With a history like this, it was a wonder that anything was left standing. Yet the main attraction of Augustow remained unscathed. The train skirted the Puszcza Augustowska, Polish for the Augustow primeval forest, In addition to the venerable woodlands. The train passed by several large lakes that the sunlight had transformed into pools of liquid fire. The natural world trumped the manmade all across northeastern Poland.

Much the same could be said of Bialystok which was the next prominent place the train stopped. Like so many places in the world which are well endowed with natural beauty, Bialystok was on the edge economically. Ever since the collapse of communism, industry had fallen on hard times. This made it a Polish hinterland and not just in a geographical sense, but also an economic one. Its youth fled to more vibrant cities further west. Bialystok was a place to vacation or visit family in the surrounding area, but very difficult to make a living. The history of Bialystok, was pretty much the history of Augustow, just on a larger scale. Half the population and 75% of the city center was destroyed during the Second World War. It was rebuilt afterward. Unfortunately, this took place under the communist regime which left a dismal legacy of concrete and smokestacks. Looking out the train window it was hard to believe that nearby stood the last stretches of the primeval forest which once covered much of Northern Europe. Deep in these woods the European bison still roamed. This ancient world has been protected in the Białowieża Forest National Park. Comparing the surrounding nature to Bialystok was like a reality episode of Beauty and the Beast.

Forever Fleeting – Momentary Raptures
After Bialystock, the stops increased, but were in less prominent places. The kind of towns that people leave, rather than visit. Lapy, Szepietowo, Czyzew, Malkina, Tluszcz. Before long we were on the outskirts of Warsaw. This would be my last train trip for at least six months. I was back to where I started two weeks before. Saying goodbye to the Welsh couple filled me with a wave of sadness. Not because we had that much in common, but from the knowledge that traveling brought me into contact with people and places that were otherwise foreign to me. I became familiar with another world, one that was forever fleeting. These were moments that I could only have for a limited amount of time. Somehow I would have to make them last forever.