Vac was clean, lively and laid back. Its squares were filled with those enjoying a sun filled sky as early autumn took hold. The cluster of churches in the city center was well worth visiting. The town’s most lasting architectural attributes had come from the Baroque era, one of the more positive and peaceful eras in Hungarian history. This made Vac seem even more welcoming than it already was. Thus, it was shocking that the town’s most notable attraction lay beneath all the happiness of Vac’s city center. The one attraction most likely to lure a tourist out from Budapest and up to Vac was dark, cold and hidden away. It was with a sense of curious trepidation that I made my way to the Memento Mori.

Crypts were never my thing. They are always chilling, both physically and metaphorically. The descent into them begins with a rush of cool air that starts off as refreshing, quickly becomes bracing and always ends up stifling. The heavy, moist air does not help matters. This is accompanied by a weighty silence, the soundtrack to mortality. One gets a feeling that death is just around the corner, as it inevitably is. I always get the feeling that something terrible is going to happen in a crypt, but it already has. The life went out of these spaces long ago. At least that had been my experience in prior visits to crypts. The Memento Mori in Vac changed my opinion of what a crypt could be. I would soon discover that the crypt was as much about life as death. It would also cause me to confront mortality. 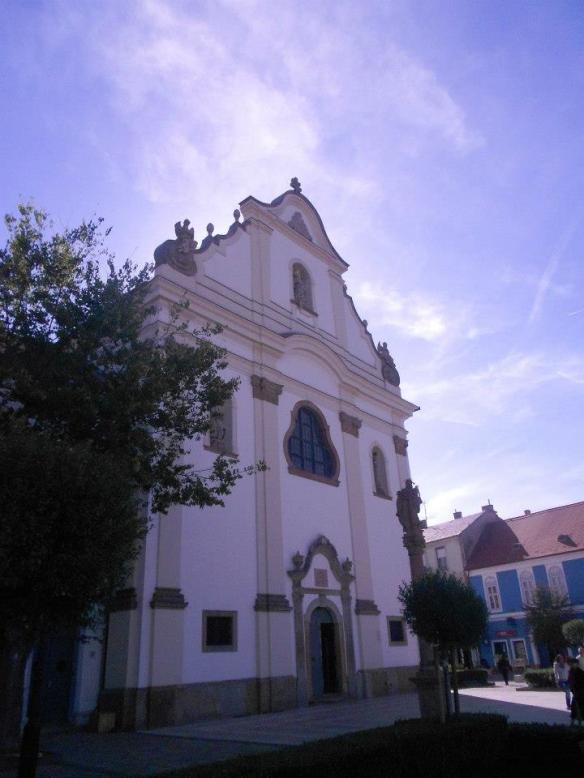 Rediscovering The Dead – Memory Bank
In 1994 during restoration work on the Dominican Church in the center of Vac, construction workers discovered a vaulted crypt that had been bricked off for over 150 years. They had made an astonishing discovery. Inside were 265 stacked, hand painted coffins of parishioners, priests, nuns and others who had been buried there between 1731 and 1839. Then somehow the crypt was all but forgotten. Because the temperature and relative humidity inside the crypt were stable, the deceased were mummified. 166 of the corpses were in such good condition that they could be positively identified. Even more intriguing than the corpses were the clothes and jewelry that adorned each one. They were dressed in period clothes, wore rosaries and other accoutrements offering ethnographers a treasure trove of details concerning the life and customs of Vac’s inhabitants during the Baroque era.

Incredibly, every one of the 266 coffins discovered was unique. A variety of symbols were painted on them to represent the lives of the deceased. These included quotes and bible verses in Hungarian, German and Latin that acted as epitaphs and remembrances. The coffins and clothes were symbols of life, offering a different take on death and how it was perceived two centuries ago. All but three of the corpses are now in storage at the Hungarian Natural History Museum in Budapest where they have been scrutinized down to the most intimate details. Scientists studying the mummies uncovered evidence of tuberculosis which raged in Baroque era Vac. This was caused by people moving from the countryside into town. The information gleaned from the mummified remains has been a boon for scientists. This has helped them learn about tuberculosis before antibiotics were available. 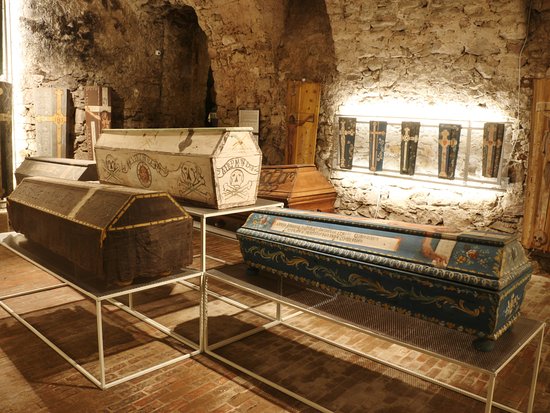 Grave Misgivings – Coffins at the Memento Mori in Vac

Freeze Frame – State Of Preservation
The three mummies and coffins on display at the Memento Mori were representative of the entire discovery. These included a male, female and an infant. As I began the “tour” which was little more than being led downstairs into the crypt, I was told that photos were not allowed. I certainly did not have any problem with this rule. Almost immediately, a creepy, voyeuristic feeling came over me as though I were entering a mysteriously ancient morgue that mortals were not supposed to visit. The atmosphere in the crypt was quiet and funereal, just as one might imagine. The problem for me in the crypt was that it forced me not so much to confront the corpses and coffins on view, as much as it did my own mortality. I discerned right away that this was where we were all headed. Maybe not to a crypt bricked up beneath a Baroque Church, but to our own silent, cold graves. The effect was multiplied once I peered inside the wooden coffins at the inhabitants dressed in their finery.

It is slightly disconcerting to peer into a wooden coffin and see a woman’s skull wearing a bonnet. My initial reaction was one of horrific bemusement. The bonnet covered skull sounds was like something out of a 1950’s horror film. In another coffin was a was man who had gone by the surname Martinovics. I distinctly remember his name for a reason that I will never quite fathom. Looking at the man and woman I was shocked. So this was what dead people looked like semi-preserved. It was hard to imagine a living soul had ever inhabited their bodies. While his clothing was colorful, the body of Martinovics looked fragile, as though he might crumble at any moment. Was this really going to be me one day? That thought was interrupted by a more disturbing one. This would be me, but only if I was lucky enough to be preserved. 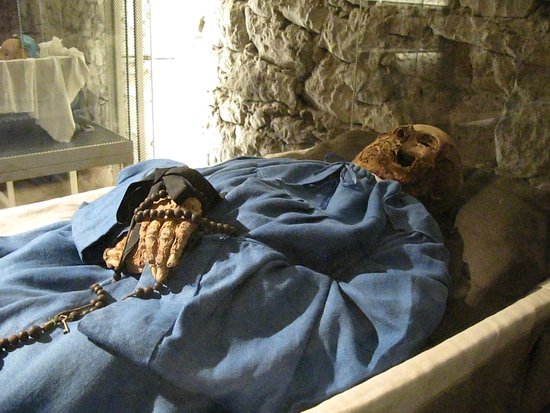 Confrontation With Mortality – Mummy at the Memento Mori in Vac

A Silent Scream – Saving The Worst For Last
The memory of Martinovics was not what would come to haunt me from that visit. I managed to save the worst for last. When I peered into the third coffin, I was suddenly confronted by a horrifying scene. In a small coffin lay the skeleton of a small infant. What caused me to recoil was the opening where the infant’s mouth had been. It formed the outline of a scream. This was beyond my capacity to process. This sight filled me at first with terror, then pain. I knew infant mortality had been inordinately high in centuries past, but the reality of a single death was brought home to me in the moment I looked at that infant. There in front of me was the reality of life and death two centuries ago in Hungary. Suddenly I realized that it was still a reality today. Many things have changed over the centuries, but death has not. That was my final impression of Memento Mori.