In the center of Tirana stands a monument to Albania’s greatest hero, Skanderbeg.
It is not surprising that Skanderbeg would be venerated in this small Balkan nation’s most sacred public space. He is universally revered as both a freedom fighter and symbol of resistance against the Ottoman Turkish onslaught during the 15th century. Following Skanderbeg’s death, the Turks occupied and administered Albania for over 500 years. Skanderbeg’s military and political skills were the only things keeping the Turks at bay. He was a unifier, bringing more Albanians under his leadership than anyone up to that time. This was as close as the notoriously fragmented Albanians would get to unification until the 20th century. Thus, the Skanderbeg Monument occupies the most prominent space (Skanderbeg Square) in the nation’s capital –- just as he occupies the most important place in Albanian hearts. There is also the fact that any man reduced to a single name in the Balkans (for example: Tito) is a historical figure of outsized importance. Skanderbeg was certainly that. His life, legacy and legend dwarfs that of all other Albanian historical figures. 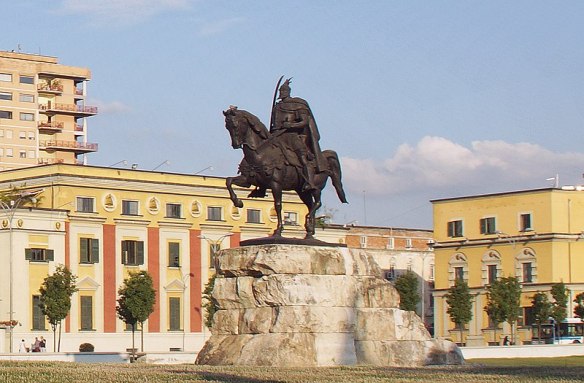 Ottoman Albanians – Hard to Find Heroes
Skanderbeg is the essence of Albanian national heroism. This is in stark contrast with the most prominent national figures of modern Albania, King Zog and Enver Hoxha. They are viewed as either ridiculously corrupt or horrendously malevolent. Men who put their own self-interest over the national one. Ironically, their faults and foibles make Skanderbeg’s historical legacy shine that much brighter. Strangely enough, though Skanderbeg was a Christian fighting Muslim, Albania is now a majority Muslim nation venerating a Christian. Five centuries of Ottoman rule transformed Albania. Yet there were also many Albanians who transformed the Ottoman Empire. Consider that other than Skanderbeg, the most famous and powerful Albanians in history were the numerous Grand Viziers this small Balkan territory produced. The position of Grand Vizier in the Ottoman Empire was essentially a Prime Minister, conducting the most important imperial affairs.

By one calculation, there were 292 Ottoman Grand Viziers, 49 of these were of Albanian origin. This was second only to ethnic Turks in holding the empire’s second most powerful position. The position of Grand Vizier afforded a long list of Albanians the opportunity to exercise an unprecedented amount of influence over the empire. A Grand Vizier had power over all military and administrative appointments, as well as being the empire’s supreme judicial official. Grand Viziers could also command the army in battle. One Albanian family, the Koprulus, provided some of the most powerful Grand Viziers in Ottoman history, so much so that an entire era was named after them. The Koprulu era (1656-1683), saw several members of this powerful Albanian family reassert the empire’s dynamism through a series of reforms. These included anti-corruption measures. The empire was revived and expanded under their rule.

Grim Realities – The Grand Executions
Since Grand Viziers served at the Sultan’s pleasure, they could also be deposed at any time. This made their position precarious, if not downright dangerous. For instance, the aptly named Selim the Grim went through seven Grand Viziers during his eight years as Sultan. One of those was the Albanian, Dukakinoğlu Ahmed Pasha, who held the office for only two and a half months before Selim had him beheaded. While Grand Viziers executed affairs of state, they were also liable to end up the recipient of a very different execution. 44 Grand Viziers were executed and another 11 killed during rebellions. They were often sacrificed by the Sultan as scapegoats for campaigns or policies gone wrong. Albanian Grand Viziers were certainly not immune to this unkind fate. Take the example of Kemankes Kara Mustafa Pasha, who on multiple occasions attempted to save himself by resigning. After falling from favor due to lurid court politics, Kara Mustafa was executed on the orders of Sultan Ibrahim “the mad”.

One of the most intriguing Albanian Grand Viziers was Mere Huseyin Pasha. He was given the name Mere, which means “take it” in Albanian because he used this word when ordering his henchmen to behead enemies. Reputedly, Mere was the only Grand Vizier who did not speak Turkish. He served in the role twice with the second time proving fatal. No one knows if Sultan Mustafa I gave the order for his Grand Vizier’s execution by saying “Mere.” Not every Albanian Grand Vizier met a deadly end, one even managed to live a long life while holding down the job multiple times. Koca Sinan Pasha managed to survive all five of his terms as Grand Vizier from 1580 – 1596. The fact that he died in peace with a large fortune speaks to his talents as a politician and administrator.

Grand Viziers were not the only high-level Ottoman officials to come from Albania. There were also approximately one hundred Grand Masters of the elite janissary guard. They also dominated much of the upper ranks of the bureaucracy and military right up until the Empire’s waning days. To give but a couple of examples, two of the five Ottoman generals at the Battle of Gallipoli were Albanian. Two Ottoman Prime Ministers during World War I were also of Albanian descent. Some historians also believe the founder of modern Turkey, Mustafa Kemal Ataturk may have been an ethnic Albanian.

Ottomania – An Albanian State of Affairs
All these examples lead to one overarching question: Why were Albanians so prominent in the upper echelons of the Ottoman Empire? After all, Albania is not a very large place and its population base was smaller than many other areas of the Empire. One reason may be that Albanians were more willing to convert to Islam than other ethnic groups within the empire. This was a path to upward mobility that Albanians often followed. It was also a way to avoid extortionate levels of taxation that were imposed from the 17th century onward to religious minorities. Meanwhile, converts to Islam would not only pay lower taxes, but also receive land grants.

At a time when society and the economy were chiefly based around agriculture, free land was a major draw. Albanians took advantage of all these paths to gain an exalted place in imperial affairs. Yet five hundred years of Ottoman rule retarded economic and social growth in Albania as well as the development of a national consciousness. Paradoxically, since Albanians held many powerful positions within the Ottoman Empire they partly had themselves to blame. All the way to the end, they were as Ottoman as anyone in the empire.