There is a great amount of truth to the idea that the Red Army destroyed Konigsberg militarily and then the Soviet Union followed up by destroying it politically. A majority of the damage was done by the Soviets, but the destruction of Konigsberg really did not start with their military or political forces. It began in earnest at 1:00 a.m. on Wednesday, August 30th. That is when a firestorm started by large payloads of incendiaries dropped on the city by British Lancaster bombers conjured up a flaming false dawn. In the darkest hours of night, the city was lit by all-consuming fires that burned a deadly swath across whole parts of the city. The factual tone of the official British military report only provides a hint of the destructive force of the bombing: “Only 480 tons of bombs could be carried because of the range of the target but severe damage was caused around the 4 separate aiming points selected…..Bomber Command estimates that 41 percent of all the housing and 20 percent of all the industry in Konigsberg were destroyed.”

Ground Zero – Total War Delivered By Air
One of those aiming points was likely the Konigsberg Castle. Just as Cologne’s splendid cathedral had provided a large target that could act as a central focus for strategic bombing of that historic city on the Rhine River, so too did the soaring Gothic styled Konigsberg Castle provide an inviting target in another historic German city, this one straddling the Pregel River. The Castle sustained a multitude of hits and was set alight. The heat was so ferocious that civilians who sought relief in the nearby castle pond found that its water was nearly past the boil point. This liquid fire was just as deadly as the blistering heat which raged in a tornadic vortex throughout the city center. Most of the castle burned and was still burning several days later. The only thing left standing were some of the walls and towers in very poor condition, anything wooden had been mere kindling for the napalm laden bombs that fell in, on and around it. The first stone castle on the site had been constructed by the Teutonic Knights in 1257. For nearly seven centuries the castle had been the iconic symbol of the city. After the bombing it was still iconic, albeit a very different type of icon. A smoking ruin symbolic of the old Konigsberg, one that would soon cease to exist.

The human toll exacted by the firebombing was just as horrific as the priceless architectural and cultural losses. The innocent, which included a  large proportion of mothers, small children and the elderly were most vulnerable. Some who thought they were safely sequestered in shelters were never able to escape them, burnt alive in what quickly became closed door infernos. Even those who safely fled from them found the medieval streets and alleyways engulfed by a firestorm of hellish proportions. In the Old Town there was nowhere to seek relief from the searing heat that torched nearly everything and everyone. The close quarters only added to the catastrophic damage. Apocalyptic scenes with flaming people running through the streets were a common sight during and after the bombing. In some areas of the Old Town, it would be several days before anyone could walk on the white hot cobblestones such was the ferocity of the firestorm. Eyewitnesses reported that the Pregel River caught on fire. In actuality, it was the wooden pilings in the river which were aflame. Hell could not have burned any brighter. 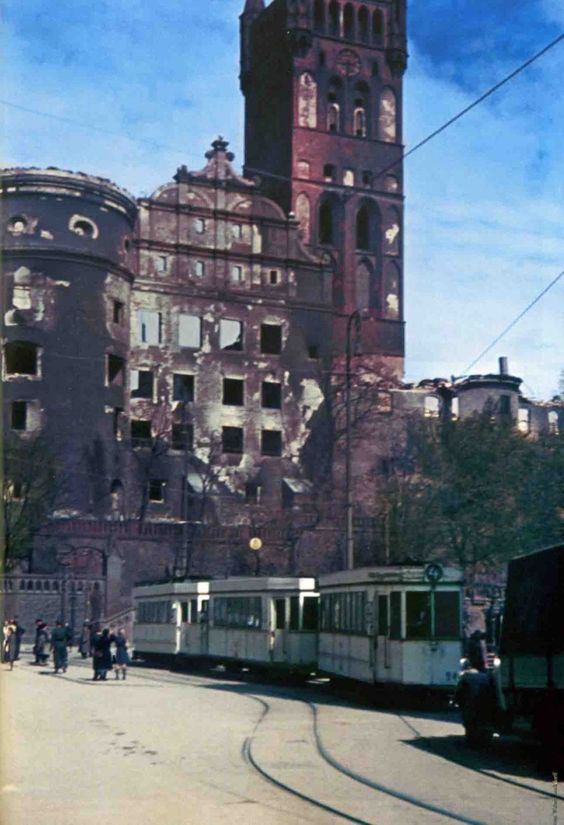 Streetcar in front of badly damaged Konigsberg Castle in 1944

Mortal Danger – Chaos & Conflagration
When dawn arrived later that morning, a gruesome cloud of ash, debris and residue mushroomed ominously above the city. Smoke billowed forth from hundreds of burning buildings. The detritus of structures and materials floated through the air falling both on the city and in villages across the East Prussian countryside. Konigsberg had been home to the largest bookstore in Germany, Grafe und Unzer. All those books filled with information and invaluable knowledge, printed to educate and illuminate, now blew through the air as incomprehensible specs of flickering dust. Debris fell from the skies like drizzle. Emergency services were overwhelmed by the human casualties, many of whom were gruesomely burned. This was a dire warning of the horrible atrocities that would befall ethnic Germans in Konigsberg during the coming year.

Much of the industrial infrastructure and war making capacity of the city was still intact after the bombing. This was a telling sign. The fact that twice as much housing was destroyed as industry meant that the Allies were looking to make the population suffer and break their will. The damage to the civilian infrastructure was immense. The British calculated that well over a hundred thousand people had been left homeless. Half of all housing in the city was now uninhabitable. The Old Town was a burnt out shell of its former self. Both the Central and North train stations were in ruins. World class cultural and academic institutions would no longer be operable. Those left in Konigsberg suddenly realized how insecure their situation was. Many either fled or began to make their initial plans to flee the city. The city had been a second home to Germans that were bombed out of cities further west, such as Berlin. Now they realized there was no escaping the war. The war fronts were closing in, Germany was surrounded and even the most far flung cities were in mortal danger. 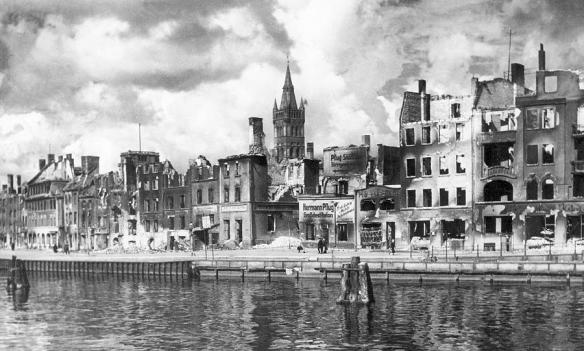 Where It All Ends – The Ruins of Konigsberg in 1945 (Credit: FriedrichTh)

The Face Of Total War – Suffering For The Sin of Nazism
The firebombing of Konigsberg was just the beginning of a very long and drawn out ending. The attack signaled that East Prussia was now within reach of the Reich’s mortal enemies both east and west. That the Allies would be merciless in dealing with a province they considered to be the heart of German militarism. The city’s role as an historic outpost of Germanic learning and culture, the home of Immanuel Kant and the highest intellectual discourse cultivated within the walls of Albertina University for five centuries, the coronation capital of Prussian kings and all of its splendid Gothic architecture meant nothing in the face of total war. Rightly or wrongly, Konigsberg and East Prussia was to suffer gravely for the sins of Nazism. It was to be a place where the Soviets could sate their appetite for revenge. As deadly as the British bombing was, even worse would soon follow.

Click here for: A Lower Level Of Hell: Rain of Terror: The Bombing Of Konigsberg (Part One)