One of the most disturbing photos I have seen from World War II did not show any battlefield scenes, it was not of any wounded, sick or dying, fire bombed cities or death camps and had nothing to do with the Holocaust. It did not show anyone being humiliated or executed, for that matter it did not show any kind of damage whatsoever. All the photo showed was four people who had not yet been harmed. They were hurriedly making their way through the dark forests of East Prussia. The photo looks as though it was taken at night. It shows these people on the move, likely a family. Their image blurred, but not deliberately so. A man is in the lead, carrying a suitcase in each hand and a pack on his back with whatever belongings he had hastily gathered. Behind him is a woman with a scarf wrapped around her head, she also has a suitcase in hand. Further back, can be seen a woman with a small child in tow.

These are people running for their lives, trying to make a last-minute escape from an apocalyptic storm. One that had been creeping ever closer on the eastern horizon throughout the latter half of 1944. Warnings of what fate might befall them had been broadcast loud and clear by German propaganda. In a bid to get East Prussians to fight for every inch of this frontier Fatherland, Nazi propaganda had spewed forth in both words and pictures information on a massacre of German civilians by Red Army soldiers in the town of Nemmersdorf on August 20, 1944. Women, young girls and even the elderly were raped, other stories told of naked women crucified on barn doors. The propaganda was effective in putting fear into the East Prussian populace, not to fight, but to flee. 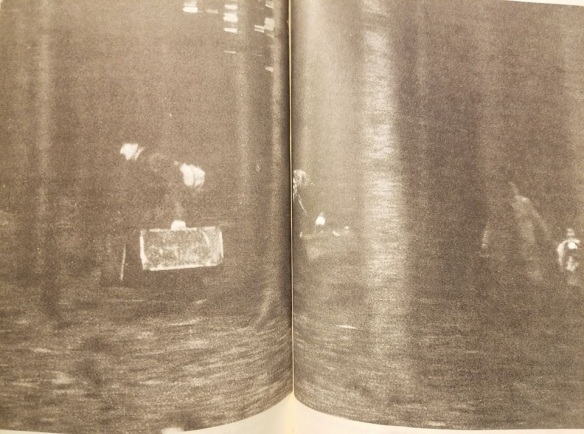 Hell On The Horizon – A Symbol Of Merciless Vengeance
As one of the bitterest winters in memory descended on East Prussia the dull roar of artillery fire had grown louder. Soon the night horizon was lit by the ghoulish glow of infernal fires. The population grew increasingly fearful, what horrors lay just a few kilometers away were not hard to imagine. The hellish horizon blazed brighter by the hour, a symbol of merciless vengeance. One can only imagine the fear and foreboding in those final weeks of 1944. Meanwhile Nazi administrators and party officials downplayed the threat, while threatening to shoot anyone who tried to evacuate and making plans for their own getaways. Thus, they left hundreds of thousands of defenseless ethnic Germans in the path of the bloodthirsty Red Army.

In January 1945, the storm finally broke, a hail of fire and steel, anger and vengeance fell upon East Prussia. This was the first piece of German territory the Red Army set foot on. All the pent-up rage from three years of apocalyptic suffering on Soviet territory – where German troops had plundered and torched thousands of villages, murdered innocent civilians and committed bestial atrocities – was now to be unleashed on anyone and anything unfortunate enough to get in their way. Soviet soldiers would fish in ponds with grenades, mass rapes occurred, family members who protested would be shot or even worse. No ethnic German was to be spared and most realized that. Thus, the hurried flights through dark forests, along snowy roads, across icy lagoons and wading into frigid waters. The scene in the photo was repeated hundreds of thousands of times, with varying degrees of success. There were those who wanted to stay and did. Witness to the final moment of a way of life that was about to become history.

Flight over fight – East Prussian refugees on the move

The Last Supper – A Countess & The Coming Chaos
The last supper must have been a hard one to swallow. Three women sat at a dinner table together for the last time. One was Countess Marion Grafin Donhoff, a scion of Prussian aristocracy and future publisher of the German news weekly Die Zeit. The other two were secretaries. It was a frigid Friday night in late January. The dinner took place at the Donhoff estate in Quittainen (now the Polish village of Kwitajny). Exactly two hundred and two years before, Philipp Otto Graf Donhoff had come into possession of the estate. Various improvements over the ensuing years had created an immaculately kept landscape. The castle house was a hub of refinement and culture in the heart of East Prussia. All that was about to come to an end. The word had been given by the local authorities that everyone should evacuate by midnight.

Countess Donhoff and her closest confidants could only imagine the dreadful fate which awaited them if they did not leave. When they finished their meal the women did not clean the table, but left the place settings just as they were. None of the women  locked the door as they walked out of the castle for the last time. Soon they were riding horses westward across a countryside covered with snow and consumed by bitter cold.  In a matter of minutes, Countess Donhoff went from a life of wealth and comfort to having next to nothing. We know about the last supper from Countess Donhoff’s memoirs, what we do not know is exactly what occurred when the first Red Army soldiers set foot inside that dining room. They would have entered with snow on their boots and blood on their hands. Almost immediately, the looting of valuables and the smashing of furniture would have begun.

Staying Behind – Everything That Had Been Lost
The landowners and villagers in the immediate area who chose to stay behind and take their chances with the Soviet soldiers were subject to extremely harsh treatment. Out of thirty people, sixteen were executed, some of which included children. The other fourteen were deported to the Soviet Union for hard labor duty.  The scene at Quittainen was repeated all over East Prussia. The Junker (Prussian landowning aristocrats) estates were picked clean of any valuables, farmsteads put to the torch, summary executions and deportations carried out on those unfortunate enough to meet Soviet soldiers. As for Countess Donhoff, she eventually made it to safety and the west, but she never forgot her last supper in Quittainen or everything that had been lost in the immediate aftermath. She was one of many scarred with that same memory.