The great Prussian military strategist Carl von Clausewitz famously described “war is the continuation of politics by other means”. Clausewitz lived most of his during the first half of the 19th century, long before Europe was consumed by football madness. If Clausewitz had lived long enough to see the passions aroused by football he might have altered his famous saying to “football is the continuation of war by other means”. For the spirit of war has been pervasive on football pitches across Europe as fans of teams both domestic and national paint their rivals as enemies. They cry for blood and cheer for victory. In the interest of self-preservation, I have avoided the emotionally charged environment of football stadiums on visits to Eastern Europe.

On two separate occasions I have been warned off attending matches by locals. In Dresden, an English speaking local told me to avoid any matches involving the city’s clubs unless I was ready to engage in fisticuffs, racial taunts or worse. While in Berlin on that same trip I noticed police lined up at the entrance to U Bahn stations near the Olympiastadion. The reason for such a security presence was that a Hertha Berlin Sporting Club match was starting soon. Even though the city’s most popular football club sported a middling record at the time, there was still the threat of riotous behavior. From this activity I surmised that football matches were as much an invitation for animal instincts to run wild, as they were about cheering on your team.

A Reputation For Violence – Proxy War
A few years later in Sarajevo, I inquired at my hotel about the possibility of seeing the stadium where the rock band, U2, had played a famous show in 1997. The owner of the hotel said the only way to get inside the stadium was to attend a football match. He then warned me that this was not a good idea for a tourist. He said that fan conduct often descended into violence. From what he said, it did not sound like a good idea for a local, let alone tourists, to attend a match unless they were looking for a fight. I erred on the side of caution, avoiding the stadium on match day. Sarajevo had seen enough war and bloodshed during the 1990’s, I did not care to see that experience replicated to a lesser extent at a football match.

Football and the Balkans have violent reputations based on warfare, both on the field and in the fields. Thus, it is not quite so surprising that prior to the Yugoslav Wars the football pitch was a proxy for battles between the disparate ethnic groups of a rapidly disintegrating Yugoslavia. The most notorious case occurred in Belgrade at a match between two domestic league titans on May 13, 1990. Following the death of Yugoslav dictator Josip Broz Tito, infighting among the various ethnic groups began to occur with alarming frequency. Domestic league football teams began to represent factions. In the case of Croatia, the Dinamo Zagreb team was known for their hardcore Ultra fans, the Bad Blue Boys (BBB). The BBB was ready for war in the stadium or countryside, whenever the situation called for it. They would prove highly adept at both. The BBB represented the height of Croatian nationalism during that time, cultivated by football loving strongman and soon to be president, Franjo Tudjman. Tudjman was a former general in the Yugoslav Army who had been intimately involved in the nation’s football scene. 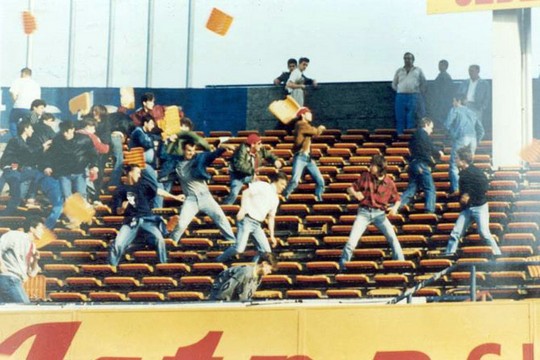 Cauldron of Chaos – Seething With Discontent
The Bad Blue Boys were Tudjman’s vanguard force in what was soon to become a battle for independence. Their blood enemies were Red Star Belgrade, which was viewed as representing a Serb dominated Yugoslavia. Ironically, at that time Red Star included players who were Croats, Macedonians, Montenegrins and Bosnian Muslims. This hardly mattered to hardcore nationalists on each side. If they played for Red Star, then they were enemies of Dinamo Zagreb. While Red Star zealots felt the same about Dinamo Zagreb. The fuse of this volatile tinderbox of nationalism was lit by a match in the spring of 1990 between the two sides. Existing tensions were stoked to a fever pitch after Croatian elections placed a government in office that preferred independence. The scene was set for explosive violence. And that was just what happened in Zagreb’s Maksimir Stadium.

Dinamo fans began hurling stones at Red Star supporters. The fences separating the two sides were no match for an acid solution that Red Star fans used to cut through them. Barriers were then torn away. Soon the two sides were engaged in a wild melee that engulfed all areas of the stadium. The players became involved as well, with one Croatian player managing to kick a Yugoslav police officer who was trying to detain a Dinamo fan. The only thing that saved the Red Star players from possibly fatal violence was an airlift by helicopter out of the stadium, spiriting them away from this chaotic cauldron. Hundreds were injured in the fighting, which included shooting, stabbing and stoning. It would not be long before the violence morphed from football games to outright war. In the waning days of Yugoslavia, football allegiance was aligned with nationalistic passions and ethnic hatred. The BBB soon took to the front lines in eastern Croatia, many of them were killed in battle. Football and warfare, warfare and football, it was hard to tell the difference as one beget the other.

A Degree of Normalcy – Keeping Your Distance
It took an entire decade of warfare before the nations that had been part of Yugoslavia came to anything approaching peace. It took at least that long for some degree of normalcy to return to the area. Football in the 21st century is much tamer in the region than before, but then again how could it not be. The threat of violence still exists at matches in the Balkans and eastern Europe just as it does across the continent. Football matches are a place where the marginalized, dissolute and frustrated can allow their worst impulses free reign. The stadiums have become a venue for overt racism that would not be tolerated in other public forums. Many people choose to be safe rather than sorry and stay away from the matches. I would still like to attend some football matches in eastern Europe for the experience. Perhaps one day I will. For now, I prefer to keep a safe distance.