The extension of the Soviet Union’s borders westward in the aftermath of World War II brought the Transcarpathian region into Ukraine. One of the results of this was that Ukraine would inherit the historic sites in the region, which had very little to do with the overriding majority of Ukrainians. By and large Transcarpathia had a very different history from the rest of Ukraine. The area had been a fringe zone where Hungarians, Poles, Romanians and Rusyns vied for control. One of the sites in the region was Nevitsky castle. It might be said that though the castle is in Ukraine, it is not quite of Ukraine, at least from a historical standpoint.

Ascendants & Descendants – Nevitsky Castle : The First Two Hundred Years
The history of Nevitsky castle is to a great extent a microcosm of the Kingdom of Hungary’s history during the Middle Ages. It does have some tangential connections to the history of the Ukraine, but these are not nearly as obvious. The first version of the castle was constructed in the early Middle Ages to help protect Hungary from possible invasion by way of the Carpathian Mountain passes to the north. The Hungarians knew from first-hand experience that these passes must be guarded. During the late 9th century, the Hungarians had used one of these passes to sweep into and conqueror the Carpathian Basin. The Hungarians did not want to fall prey to the same stratagem they had used. Thus in the 12th century, Nevitsky Castle was constructed on a 260 meter high volcanic rock outcropping above the Uzh River. This highly strategic point guarded both trade and possible invasion routes. The first version of the castle did little good in slowing down the Mongol advance which came roaring through the area in 1241. The land that is presently Ukraine had already been ravaged by the Mongols, the Kingdom of Hungary was to be next. The Mongols put Nevitsky’s wooden structures to the torch, resulting in its utter ruin.

The Mongols only stayed in the Kingdom of Hungary temporarily before they retreated eastward. The upshot of the Mongol Invasion was an order by Hungarian King Bela IV for stone castles and fortresses to be built in order to better protect the Kingdom. Nevitsky was soon restored and refortified in a much more substantial manner. While Hungary was able to recover from the Mongol disaster relatively quickly, the course of Ukrainian history was irreparably altered by the invasion. Kievan Rus ceased to be the center of power for the Eastern Slavic world. The power base of the Slavic world gravitated to the Grand Duchy of Moscow, what would eventually grow into Tsarist Russia. Meanwhile, as the 14th century dawned Nevitsky once again came under foreign rule, but this time it was not from invasion, but by invitation.  The King of Hungary at the time, Charles Robert, transferred ownership of the castle to members of an Italian family of French origins, the Drugeths. This made sense in light of the fact that Charles Robert had the same ethnic background as the Drugeths. Members of the family had loyally fought on the side of the king in helping defeat rebellious aristocrats to secure his rule. The Drugeths were richly rewarded for their service. Nevitsky was just the start as the Drugeth family began their meteoric ascent to become the largest landowners in the Kingdom of Hungary. Like seemingly everything in the fringe area of Transcarpathia, it would not last.

Enemies Within – The Ruin Of Nevitsky
The decline of the Drugeths and Nevitsky as an active castle came not from without as so often happened in the Kingdom of Hungary’s history, but from within. Family infighting plagued the Drugeths for decades. This led to such bizarre situations as the time when in 1600 one family member besieged the castle with a 3,000 man strong army. Inside the walls were the wife and children of the recently deceased head of the Drugeths. They were forced to flee and leave the country. Land and power trumped bloodlines. The end for Nevitsky came less than half a century later. The Drugeths were supporting the Catholic Habsburgs. In the Middle Ages, religion was a much stronger identifier than nationality. The problem for the Drugeths is that Nevitsky was situated in an area consumed by Protestant fervor. They incurred the wrath of the powerful Transylvanian princes. In 1644, Gyorgy Rakoczi I, Prince of Transylvania captured Nevitsy, destroying much of the castle. A new chapter in the castle’s history dawned that continues up through the present, the castle as a ruin.

Today when visitors go to Nevitsky they can see one of the original towers still intact. There are also substantial portions of the walls. There is always something romantic and evocative about ruins that lends them to the imagination. The act of imagination can also distract from the lessons and instructiveness of such ruins. Despite its position towering above the Uzh River, despite multiple constructions that upgraded its defenses, despite the wealth and power of the Drugeths, Nevitsky eventually failed. The seeds of its destruction came from within. For all the chaos and violence imposed on Hungary by the Mongols, Ottoman Turks and the Habsburgs, the ultimate problem came from within. Whether it was the divisions of a family, of the nobility, of religion, or of nationalities the weakness engendered by internecine disputes was ultimately a fatal flaw that time and again brought the Kingdom of Hungary defeat and eventually destruction. The ruins of Nevitsky Castle can be seen as a physical manifestation of this trend. 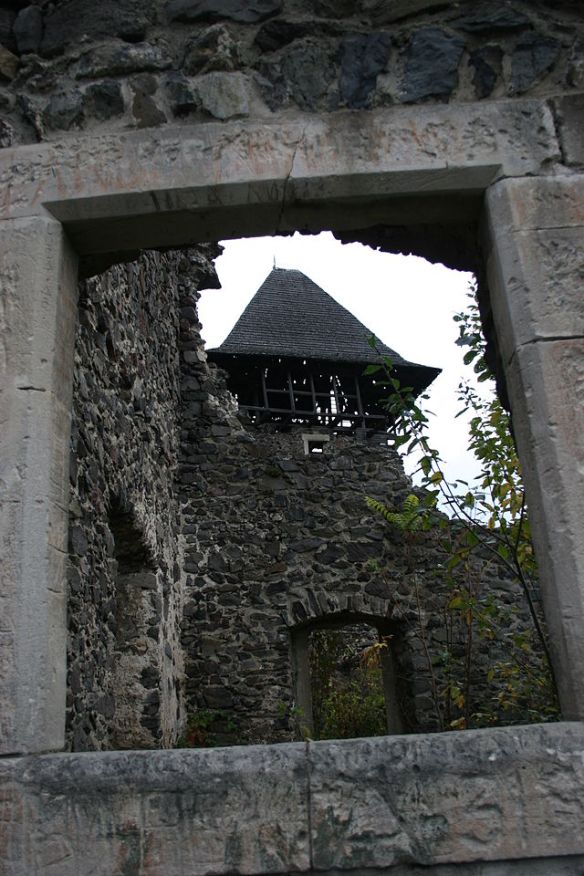 The ruins of Nevitsky castle – a window into the past (Credit: Anatoliy Fedusenko)

Disunity – A Warning To Ukraine
Nevitsky Castle’s ruins are now a much visited tourist spot in modern Ukraine. The place and its history would seem to have little to do with Ukrainians, but it still offers lessons. Presently Ukraine is embroiled in a war on its eastern border. Russia has done much to bring this about, fomenting discontent and violence. These insidious efforts have been aided by disunity inside Ukraine. This war is not just between ethnic Russians and Ukrainians, but also between Ukrainians themselves. There are regional differences, religious differences, generational differences, economic differences. All these divisions only serve to weaken Ukraine. What will the end result be? The ruins of Nevitsky Castle serve as a warning of what the future might hold for Ukraine if it fails to unite.