The trips not taken haunt me. They come back to me in the strangest places, at the strangest of times. These memories are ghosts that materialize and vanish seemingly without reason. The most recent occurrence took place while I was at a used bookstore in Akron, Ohio. It all started when I came across a book, part travelogue, part history titled the Black Sea by Neal Ascherson. I had been hoping to find something fascinating on the region. Discovering the book in a very thin section of Eastern European history, I worked hard to persuade myself to purchase it. While perusing the book, I came across several passages on Ukraine. That was when a thought suddenly arose of Odessa, that fabulous Black Sea port city with its magnificent multinational past and fatally tragic Soviet history.

I began flipping through the book once again. I soon came across passages on the Ottoman Turks. Suddenly my mind connected the two, not somewhere in the historical past, but in my own personal past. Over a decade ago I got the idea that I might return to Istanbul for the second time in my life. On this trip, I would be alone rather than with my best friend who accompanied me in 2008. The trip would be a romantic adventure, where I would board a ship in Istanbul for a voyage across the Black Sea, arriving a day later in Odessa. Though I had no idea if this was possible, I decided that such a trip was worth researching and possibly attempting. Thus, I set out on a distant and memorable journey, one more of imagination, than reality. A journey that eventually led to nowhere. 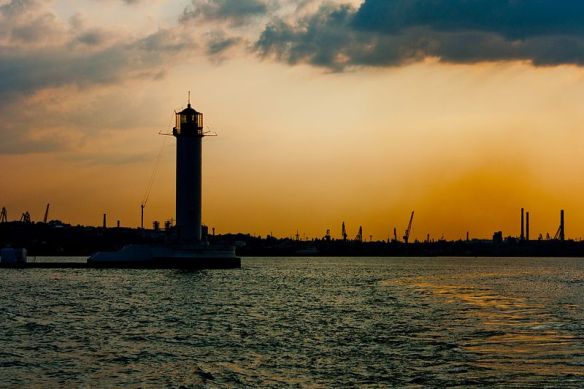 A Dream That Outlasted Reality – Port Of Entry & Exit
Before hitting upon the idea of a possible seafaring journey to Odessa I stumbled across the name several times while traveling. My closest brushes were trips through the same named places in Texas and Washington states. The former was a frighteningly ugly oil city out on the dusty flatlands of West Texas, the latter a small town in eastern Washington known for its fertile farmland that had been settled and cultivated by Germans from Russia. These settlers began their emigration to America by leaving from the bustling port of Odessa and crossing the Black Sea in the late 19th century. They left at just the right time, avoiding the cataclysms that would soon arrive in Odessa by both steppe and ship. Both American towns – along with eight others in the United States – were a long way from the bustling, cosmopolitan port city that has been a window on the wider world for Ukraine, the Soviet Union and Tsarist Russia since it was founded by Catherine the Great in 1794 and intensively developed under the vision of Frenchman Armand, Duc de Richelieu.

The city became a free port in 1819, which led to an even greater expansion of trade and investment. Merchants and associated industries grew wealthy off the grain trade exported from Odessa. The upshot was a beautiful Mediterranean style city stuffed with Italianate and French architecture on the edge of Ukraine. It was a dream that managed to outlast reality, surviving revolution, imperial collapse and a seemingly endless succession of catastrophic wars. For me, Odessa had to be seen to be believed. It was home to several notable sites including Odessa’s famed Opera and Ballet Houses along with the statue of the city’s greatest leader, Armand Duc De Richelieu, which stands at the pinnacle of the famous Potemkin Stairs. The allure of this mysterious port city focused my gaze firmly on a trip to Odessa.

Imaginary Revelry – Ghosts In Broad Daylight
There was another side to Odessa I was unwilling to admit to myself during these moments of imaginary revelry. It was now located in Ukraine, a nation rife with corruption. The country was being run off a cliff by menacing oligarchs who were controlled an insipidly bad government for their own narrow interests. Odessa, one of the busiest port cities on the Black Sea, was a great place not just for history and atmospheric architecture, but also for smuggling, rent seeking, laundering money and human trafficking. These criminal activities washed up or sailed away from its magnificent warm water port. The present condition of Odessa (this was in 2010) was described by many journalists and travel writers as one of faded glory. The kind of place haunted by ghosts in broad daylight.

Traces could still be found of a Jewish population that held a slim majority on the eve of World War II, of the international financiers who were run off by the revolution and of the terrifying Stalinist purges which destroyed much of the city’s human capital. All of this occurred prior to the coup d’macabre, when the Nazis showed up and encouraged a crazed Romanian occupation force to wreak murder and mayhem on the local Jewish populace. If drama is conflict, then Odessa during the 20th century was a Shakespearean play with all the actors at war with one another. After their conflicts subsided, only an audience of astonished onlookers was left to sort through the wreckage. All along Odessa’s beautiful boulevards history’s miseries and mysteries were there for the taking, if only I could find my way there. Unfortunately, getting there from Istanbul by ship would turn out to be problematic. 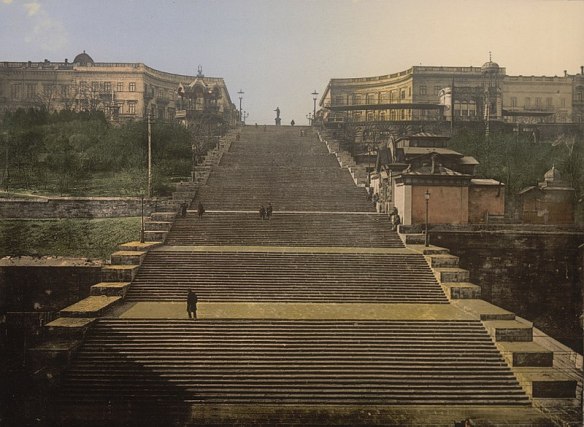 A Stairway To The City – The Potemkin Stairs in 1905

Cargo Holds – Passengers As Appendages
Traveling by sea to Odessa was like the greatest things in life, it could not happen without a struggle. A struggle that took place, not so much within the city, but within myself. I soon discovered that only a single ferry line made the trip one or two times a week between Istanbul and Odessa. The infrequent journeys were at the mercy of cargo transport. These were Ukrainian ships running ferry services on the side. They were not making their money transporting passengers. Instead they were in the business of transporting goods. This made sense. Odessa is the busiest port in Ukraine. As such, massive amounts of cargo travels in and out of the country through it. Passengers are a mere appendage on such journeys. Traveling on a cargo ship to Odessa was not exactly what I had in mind. I was also beginning to realize the problem with my Odessa dream, it was shared by few others.