Castle Hill (Varhegy) in Budapest is incredible and not just for its architecture. The fact that there is anything still standing atop the hill is either a miracle or a powerfully encouraging sign of Hungarian resiliency, depending upon one’s perspective and system of belief. The Hill has been riven time and again by centuries of warfare. Just about every medieval and modern weapon has been used against it. From catapults to cannons, arrows to harquebuses, arsenals of weaponry have been used to break the will of those defending this limestone plateau. Innumerable sieges and counter-sieges have taken place, to the point where besiegers often end up becoming the besieged. And after all the bombs and bullets have been expended, Hungarians have still managed to claim Castle Hill as their own. I can think of no greater example of staying power.

Lots of War & A Little Peace – Deconstructing History
To get an idea of just how traumatic the history of Castle Hill has been, start with numbers. By one count, since the Mongol invasion in 1241 through the end of World War II in 1945, there have been eighty-six different times Castle Hill was ravaged by warfare. In other words, on innumerable occasions it was left in ruin. That number equates to an average of one cataclysm every eight years. With this kind of combative past, it is a wonder that any buildings are still left standing atop this stricken plateau. Yet a multitude of architectural wonders rise proudly on Castle Hill today. This speaks to the long period of peace that has occurred since the end of World War II. It has now been 73 years since a shot was fired in warfare atop Castle Hill. No one could have known that when the guns fell silent on February 13, 1945, ending the Red Army’s victorious siege of Buda, that this would conclude seven centuries of warfare. At least for now.

To the naked eye of tourists, all those withering assaults on Castle Hill might seem to have disappeared without leaving so much as a trace. A closer look reveals the ghosts of warfare elegantly hidden behind fashionable facades. The most noticeable traces can be discerned by a probing eye coupled with an investigative intellect. Armed with foreknowledge of the various iterations that were built to imitate the past, a visitor can see the hints of a deeper history exposed in plain sight. A good example of this are the many deliciously colored coated Baroque houses lining the Castle District’s streets. These Baroque beauties sport nary a bullet hole, then again looks can be deceiving. Each of these houses were elegantly reconstructed after the Second World War. Sources indicate that when the Siege of Buda ended, only five of the houses left on Castle Hill were still habitable. Due to the extensive damage and exorbitant cost, reconstruction was not completed in the area until the 1980’s. The wartime destruction did have one unintended benefit, many elements of Gothic and Renaissance architecture were unearthed and then incorporated into the reconstructions. 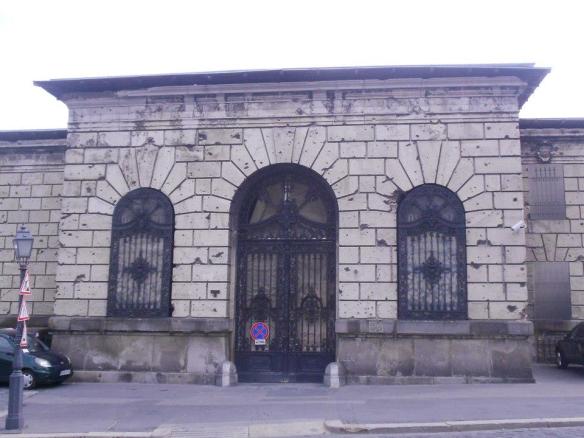 Lack Of Defense – A Monumental Reminder
As thorough a reconstruction as the buildings on Castle Hill have undergone, there are still scars of war in the form of bullet holes to be found. Ironically, the most prominent of these is located at the former Ministry of Defense building where Szinhaz utca runs into Disz ter. This rather non-descript, neo-Baroque styled building stands halfway between Buda Castle and Matthias Church. Tourists rushing back and forth between those two splendid structures often overlook the war damaged building. They fail to notice the monumental reminder of warfare confronting them. Yet the building is pockmarked with unmistakable evidence of the siege. It offered a poignant moment for me when on my first visit to it. I ran my hand across a stone wall and dug a finger into one of the gaping bullet wounds. Here was a tangible trace of gunfire from either a Soviet or German weapon. It was the ultimate outcome of an ideological struggle between fascism and communism, an outcome that spit itself out the barrel of a gun.

The bullet that made this large indention, like tens of thousands of other bullets fired in the Castle District, was meant to maim or kill. Instead, it struck stone, leaving an unforgettable impression in a future age.  An age of peace and prosperity that belonged to another world, the one in which I was lucky enough to now live. This present world had hardly anything in common with the world of war which had transmitted this bullet hole to me. I have never felt so close and so far from war as when I dug my finger into the lasting remnants of that cataclysm. 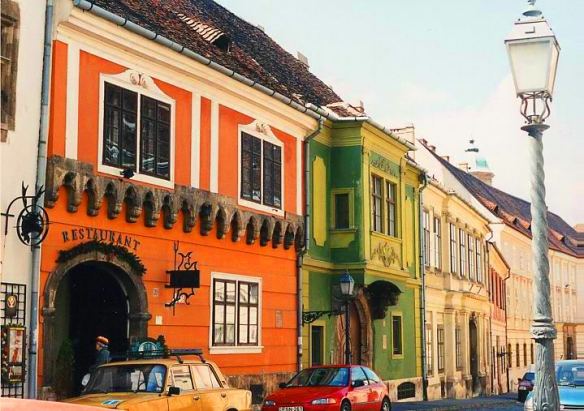 An Age, An Idea, An Empire – Dying at the Hands of the Next
The building’s integrity as a still standing, non-reconstructed monument to the fire and fury of the apocalyptic siege of Buda is now threatened by a government planned reconstruction. Last time I visited, fences kept visitors away from the building’s walls. Nice and neat, elegant and classy might soon replace the power of real that resides in this place. If the walls are redone, if the memory of war is erased, then the only reminders of Castle Hill’s destructive history will be confined to hidden niches or buried beneath a thousand cobblestones. What will be lost is not just evidence of one siege, but a connection to all the conflicts that have plagued this magnificent plateau’s past.

There is something about seeing the actual place where hellish events happened that causes a person to contemplate the horrors of war. The thought of what it must have been like to fire a gun or hide from a hail of bullets, to kill or be killed, a hundred thousand times over, that can be enough to make the most courageous person recoil at the idea of using combat to settle affairs of state and ideology.  For the course of empire or the pursuit of power, that was the way eighty-six worlds ended atop Castle Hill. In that maze of medieval streets, one age or idea or empire died at the hands of the next. And it kept going on and on and on, until 704 years of history and misery came to a halt in 1945. Let us hope it never happens again. The history of Castle Hill shows that it will.

Click here for: A Meeting With Expectations – Buda Castle Up Close & Impersonal (For The Love of Hungary – Part 6)