When I think back on my first visit to Lviv, I find it almost impossible to consider that trip without also reflecting on the last time I visited the city, three more trips and four years later. During the interim, Lviv had hosted matches for the Euro 2012 Football Championships, been buffeted by the economic and political tumult of the Maidan Revolution, seen remarkable growth in its burgeoning Information Technology industry and become a major tourist destination. It was the latter change that would become most visible to me. The Lviv I visited in 2011 was still a rather sleepy place for foreign visitors. I remember thinking “everyone should see this place.”

When I would tell friends or family to visit Lviv, they would recoil in shock at the mere mention of Ukraine. They could hardly believe I had been brazen enough to visit that ill-fated land. I told them Lviv was different from stereotypical Ukraine, it had more cultural and historical connections with Mitteleuropa than Moscow. It was the furthest eastern extent of the Renaissance, the old Polish Kingdom and Austria-Hungary. It was a new and different Ukraine, one filled with hope and possibility, leaning towards the west. Of course, I said all this in the knowledge that my advocacy for Lviv was falling on deaf ears. The city could not escape Ukraine and its dangerous reputation or so I thought.

A sense of direction in Lviv (Credit: Buka – Власна робота/)

Charm Offensive – The Old Town Imagined Anew
In the fall of 2015 I found out the meaning of be careful what you wish for because you just might get it. I said everybody should see Lviv and it this wish had been granted. Lviv was packed with tourists on the weekend of my arrival in the latter part of October, not a time usually known for heavy visitation. At certain points in the Old Town I was standing elbow to elbow in crowds. I heard as much Polish as Ukrainian being spoken. The cafes and coffee houses had a refined, sleek veneer. The cobblestone streets and sidewalks were pristine, some of the trams looked as though they had been transported from the space age and the smart, immaculately kept shops could just as easily have been in France or Germany rather than Ukraine. Lviv had been “discovered”. To find any hint that only twenty-five years before Lviv had been part of the Soviet Union, I would have had to flee the city center. Most tourist establishments used Latin as well as Cyrillic script in their signage now. Lviv’s Old Town looked so smart, tidy and trendy that I wondered if it had ever or never looked this way. Lviv was managing to charm the masses with a reinterpretation of itself.

The Lviv I first visited in 2011 had yet to realize its full tourist potential. Outside of the Old Town, signage in Latin script or written in English was scarce in the extreme. The amount of English spoken was even rarer. The Old Town at that time was evocative rather than electric. The range of accommodation on offer was limited, with few good hostels. Tourist information in English could be found, but only after searching. Except for the locals, I felt as though I had the city to myself back then. Mass tourism was a thing of the future. 2011 was a time when I could stroll the narrow streets, four years later I would jostle my way through them. I could hardly blame Lviv for this transformation, it was cultivating Old World charm in a bid to boost its economy. A reminder of this came blaringly loud at strange intervals, as a trumpet played a few notes that seemed to signify some sort of medieval sounding call. I had heard much the same thing in Krakow four years earlier, Lviv was becoming more like its bigger, more well-known Galician sister city.

The Logo Says It All

Come Together – The Lure Of Lviv
In the interim, Lviv had inadvertently managed to gain from the instability in Kiev and unrest in the eastern part of Ukraine that started with Maiden. Through no fault of its own, Lviv was some 1,200 hundred kilometers away from the violence consuming parts of the Donbas region. This made Lviv one of the safest places to live, invest or visit in Ukraine. When the Hryvnia (Ukraine’s currency) plummeted in the wake of Maidan, Lviv became one of the best values for domestic and foreign tourists. Domestic tourists could no longer afford to go abroad, so instead they traveled to the most European city in Ukraine which also happened to call itself the most Ukrainian. The weekend of my arrival there was a living history reenactment of the street fighting which occurred during the 1918 Battle of Lemberg (Lviv’s Austrian name) following World War I.

The reenactment took place in Rynok Square which was packed with Ukrainian and Polish tourists looking on. It was strange watching a battle reenactment in a country that was currently at war. It was stranger still that Ukrainians and Poles stood side by side watching. Once blood enemies, they were now united in their fear of a resurgent Russia or quite possibly they were just looking to be entertained while on holiday. Tourism and marketing had brought hundreds of people into Rynok Square that day. City leaders are hoping to lure tens of thousands more to follow in their footsteps.  As much as I selfishly would like Lviv to be the way I found it in 2011, there is little hope of that. The same year of my last visit – 2015 – the city hosted two million visitors for the first time ever. Such increases led to the creation of 30,000 jobs in the tourism sector over the last several years. With much faster rail links to Krakow and Kiev, the tourist numbers are only going to increase. 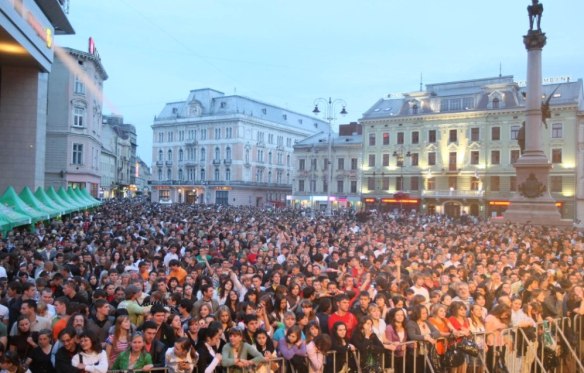 Waiting on the future in Lviv

A Selfish Desire – Old World Beauty
My memory of that first visit to an uncrowded Lviv is still vivid, wandering around a spacious Rynok Square, the churches empty except for the locals and restaurants hoping for a few more patrons. That moment is now as much history as anything else in Lviv. I had been fortunate to visit the city before millions of tourists smoothed the cobbled streets with their foot traffic. Yet my perspective has become skewed by a selfish desire to want Lviv all to myself. If I am honest, I was just as much a part of the increase in tourist numbers as the masses I profess to loathe. By the time I arrived in Lviv, it had been transformed from a crumbling, neglected Ukrainian provincial city, to a vibrant Old World beauty. A city that millions would come to visit, just as I did. My “discovery” of Lviv was like learning a secret, only to later learn that it’s been passed around.