It was my last day in Sofia and I did not have the eagerness or energy to explore the city. I have always found the day before the end of a trip to be among the most difficult. The moment when there is nothing left to look forward to is fast approaching. A feeling of resignation sets in, putting an end to any ambition I may still have to explore. My thought process can best be described as: “it will all come to an end soon enough, so why bother.” Everything I see or do on the last day will be a painful reminder of all that I will leave behind.  The mysterious, the exotic, the otherworldly will soon vanish, replaced by forty hours a week of frustrations, made worse by the displeasures of domesticity. Such a fatalistic instinct does not lend itself to site seeing, it is more conducive to laying in the bed at midday with the curtains closed and covers pulled over my head. I have come to understand this as a form of travel depression. It is quite the opposite of the usual maladies that plague travelers such as bad flights, impure water and foreign food. Instead, my depressive malaise was induced by a counter-reaction to all the life altering experiences and magnificent memories that came earlier on the same trip.

Sleepless In Sofia – A Broken Relationship
To be honest, thoughts of re-experiencing Sofia did nothing to lift the cloud looming above my final day in the city. My flagging spirits were reinforced by thoughts of when I first explored the city two weeks earlier. I had found it confusing and disjointed. The main attractions, such as a clutch of magnificent churches and a fine mosque offered windows into the mysterious beauty of Bulgaria, both spiritually and architecturally, but I had trouble developing a coherent idea of the city or country after hopscotching around for a couple of days. The gigantic Stalinist structures in the government quarter had left me aesthetically intimidated. While the seemingly endless rows of concrete apartment blocks that loomed on the urban horizon were the height of soullessness, both literally and figuratively.

There was a disconnect between me and Sofia. I could never mesh the city’s beautiful name with what I felt while visiting it for the first time. My intuition told me there was something wrong.  In short, Sofia and I were headed for an inevitable breakup that I was looking forward to. My attitude was not helped by the fact that I had barely slept in the stifling hot box compartment of the night train from Belgrade. A couple cups of ultra-stout coffee kept me upright as I stumbled down the street wondering just what to do. I was not a day sleeper, even when at the point of exhaustion. Besides, I would likely be kept awake by the screaming sunlight of a brightly lit Sunday morning, thus I had a choice to make, either summon what strength I had left or hide beneath the bed sheets. This was likely to be my last day in Sofia, not just on this trip, but forever. I had to do something, but did not have the energy to formulate an independent plan. In my current state, all I could hope for was to be led around.

Motley Crew – Foreigners On A Free Tour
There was one thing that might provide an antidote for such overwhelming lassitude, the Sofia Free Tour. My friend Tim, who had first introduced me to free tours in Bucharest and Budapest, had recommended the Sofia tour. I discovered that the tour would meet at the noon hour, ironically outside what I imagined to be one of the least friendly places in Sofia, the Palace of Justice. The Bulgarian government is notorious for its opacity and corruption. I half-wondered if the tour was meeting at the Palace of Justice so the government could keep all foreigners under surveillance. In my groggy, zombie like state I found it to be an unsettling thought. Just making it to the meeting spot at the appointed time was a triumph. I was surprised by how many other foreigners were there as well. Tour participants numbered well into the double digits. All were foreigners, the lone exception being our guide.

I met a very handsome and well-spoken Spaniard who enjoyed having photos taken of himself. An older Swedish husband and wife couple. I admired the husband more than he could possibly imagine because of one simple fact, he was retired. His wife had taken a job with a multi-national company in Sofia. While she worked, he planned on hanging out. With a Swedish pension, he could live like royalty in Sofia. According to the husband, wine was very cheap in Bulgaria. From the look of glee on his face, he planned to enjoy many libations.  There was also a short, skinny and rather scared looking Argentine. I imagined his role in life was to look frightened. I just had to talk to him, if for no other reason than to ask how he found the courage to travel abroad. He looked terribly worried when I asked him where he had been. His previous stop had been Edirne in the European part of Turkey. It was famous for a beautiful mosque, I inquired if he had visited it. Yes, he had, but he was glad to get away from the city. I asked him why?

He said the Turks would not leave him alone. They kept trying to sell him things and followed him everywhere he went. He could not get away from them. Listening to this man, I began to get worried as well. Not so much about Edirne, as to how many nervous breakdowns he had each day. By the looks of it, he was on the verge of another one at any moment. There was also a Greek family, with an older mother who could not understand a word of English, but smiled pleasantly. I talked with her daughter about how I had planned to visit Thessaloniki, but the debt crisis had hindered that trip since all international trains into Greece had stopped running. She gave me a go to hell look that put the fury of Electra to shame. 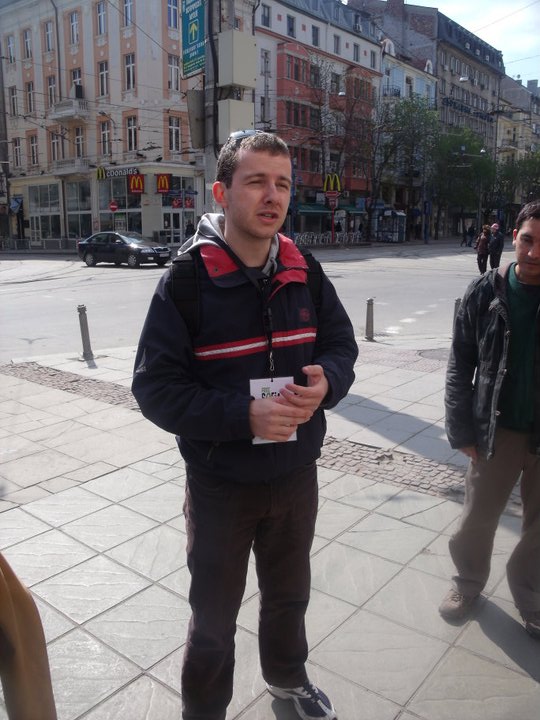 The Optimistic Bulgar – A Guide To The Future
Our pleasant and affable guide, a young Bulgar by the name of Boykan, was there to greet everyone. He was young, still at university and very enthused about Bulgaria’s membership in the European Union. His English was excellent. The cold diffidence with which older Bulgars treated strangers was nowhere to be found. Communism was history, rather than a memory for Boykan. I was looking at an exemplar of Bulgaria’s future. Youthful optimism was something Bulgaria badly needed. As Boykan began the tour, his affable nature and intelligent discourse helped clear the cobwebs out of my head. This tour might be better than advertised. I was ready to give Sofia a second chance.