At breakfast on our last morning in Cesky Krumlov I struck up a short conversation with the young lady and her husband who owned the pension where we had spent the last four nights. I expressed my relief that we had come in the winter. Despite the continuous snowfall during our visit, the town had lived up to its billing as a UNESCO World Heritage Site. The castle/chateau was enchanting. The medieval Old Town stuffed with atmospheric buildings and its natural setting, wrapped around a bend in the Vltava River, nothing short of spectacular. The entire experience had been delightful. Cesky Krumlov was one of the few places that could match its outstanding reputation. Since the fall of communism that reputation has been a boon for the town’s economic development. On the other hand, it has also led to an oversaturated tourist market.

The Off-Season – Cesky Krumlov in the depths of winter

Herd Mentality – Capitalizing On Popularity
The number of visitors to Cesky Krumlov has risen exponentially since the Iron Curtain fell in 1989. It is now hard to imagine how a small Czech town of some 14,000 manages to host 800,000 visitors a year. It was that fact which made me remark to the pension’s proprietress that “I would not want to be anywhere near this town during the summer.” I was making this remark after my wife and I had just spent several days slipping and sliding our way down cobblestoned streets in the Old Town. Footing was treacherous, but tourist traffic light. Outside of a small army of selfie stick wielding Chinese, there were only a few scattered tour groups and couples visiting in what was the dead of winter. Thank goodness for that! I could only imagine the crush of tourists packed into the Old Town’s serpentine streets on a hot summer’s day. Cesky Krumlov was quaint and atmospheric when half-empty. The opposite would be true when the town suffered its annual invasion of package tourists, days trippers and grizzled geriatrics.

Our pension’s proprietress confirmed this when she said, “I cannot go into the Old Town during the summer. I can’t even move.” According to her, throngs of tourists jostled with each other for every inch of space. It was almost impossible to enjoy yourself. I imagined all she or anyone else would have seen was the hair on the back of someone’s neck, a zillion selfie sticks and Cesky Krumlov Castle towering above it all, a symbolic reminder that there was something worth seeing, if only everyone would get out of the way. The summer tourist season sounded dreadful. One long slog of sharp elbows, queue jumpers and tourists who preferred shopping over sightseeing. At least, the proprietress could lament this state of summer affairs with a silent glee. After all, she along with many of the locals were making a good living off the town’s outsized popularity. Large infusions of Euros went a long way to mitigating the annoyances of mass tourism. 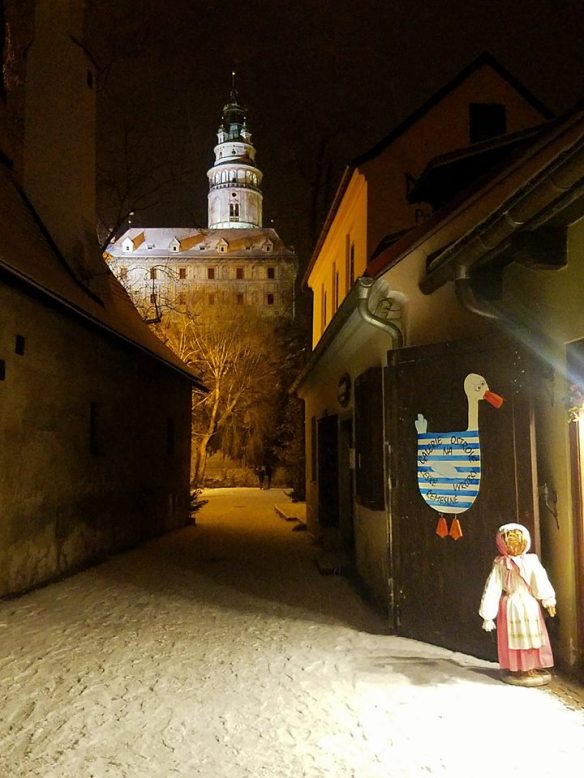 False Economy – Congested With Crowds & Haute Couture
Traveling in the Czech Republic during winter can be a challenge. The roads are often icy, the sidewalks covered in snow, but it is a risk worth taking if travelers can have Cesky Krumlov mostly to themselves. That is an increasingly rare experience. Modern tourism is a runaway train, heading for the Cesky Krumlovs and Dubrovniks of the world. Running over and through these ultra-popular places while monetizing everything and everyone in the process. Cesky Krumlov does have much to recommend it, but there are also reasons for caution. Perhaps Cesky Krumlov is the way modern mass tourism is meant to be. If so, then the situation is rather disturbing. While I never got to experience the crush of tourists that descend on the Old Town, my eyes were affronted with another scourge that sprung from the town’s popularity with tourists. These were the ultra-expensive shops of luxury designer brands that can now be found in the heart of Central and Eastern Europe’s Old Towns. I expect stores high end fashion stores such as Swarovski and Zara in Monte Carlo not a small historic town in southern Bohemia. In Cesky Krumlov these stores seem incongruous, outliers that call into question the uses and abuses of this uniquely historic townscape.

My question is why would anyone spend their time at Cesky Krumlov shopping for designer brands? Perhaps there is something about the Old Town that encourages visitors to open their wallets in order to make their experience more memorable and/or dreadful. It all depends upon your perspective. I do not wish to begrudge locals of the hard won Czech crowns they earn from such stores, but I sincerely doubt anything within the gilded walls of these establishments has much to do with the Czech people or culture. It is ironic that someone would travel hundreds if not thousands of kilometers to visit Cesky Krumlov, only to eschew its magnificent history, culture and architecture for the superficial eye candy of haute couture. These stores only add to congestion in the town. They add little of value in my opinion and send the wrong message. Cesky Krumlov is unique, not like any other place in the world. Then again, it was unique until Michael Kors set up shop.

Spillover Effects – The Consequences of Overcrowding
The most alarming aspect of the mass tourist influx to Cesky Krumlov is that there is no end in sight. The Old Town is already bursting at the seams with visitors. This is not only the case during the summer months. Spring and fall have been effected by the spillover from summer. Speaking of spillover effects, Cesky Krumlov is close enough to Prague for day trippers. This means that many millions of visitors are within reach. The tourist experience at Cesky Krumlov is in danger of being totally degraded. I doubt this bothers those who just want to visit for just a few hours. The town’s charm will likely survive, but only for those who venture out on early mornings during the high season or those who brave winter conditions. For everyone else, Cesky Krumlov will be a constant fight to avoid being crowded out.

Click here for: Seriousness With A Smile – A Traffic Ticket In The Czech Republic (A Czech Winter’s Journey: Part Fourteen)