On March 15, 1939, the sun rose on the eastern slopes of the Carpathian Mountains, in the land known as Subcarpathia. A new day was about to dawn both literally and figuratively. For the eight hundred thousand-odd people living in Subcarpathia at the time, it would be their last day ever as part of Czechoslovakia. The area was about to experience an identity crisis of historic proportions. This remote land, a forgotten backwater, began the day as an autonomous region of Czechoslovakia. At lunchtime it was a newly independent nation, known as the Republic of Carpatho-Ukraine. By the next morning it was part of Hungary. Independence was fleeting, it did not even last the night. In just twenty-four hours, the population had been part of three separate nations. If given a choice, the majority of the populace would have preferred independence, but history was not on their side. The story of this land and its people’s geo-political situation over the past century is filled with fits and starts, false hopes and lost dreams. Independence turned out to be a dead end, but in the process, due more too historical accident rather than design, by the end of the 20th century, the region had received the next best thing, virtual autonomy. Through it all, in defiance of fate, the majority Rusyn population of the area retained a distinct identity. 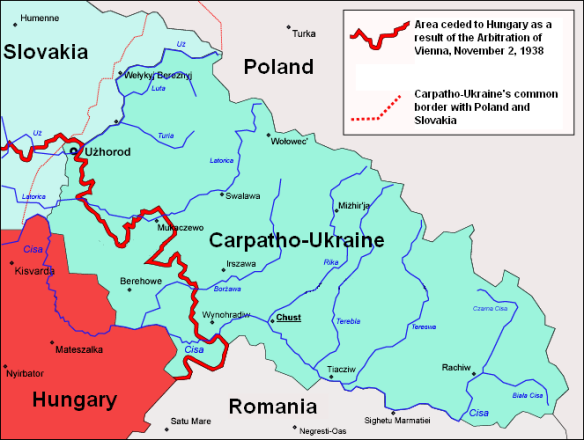 Playground of the Powers: Great & Small
Carpatho-Ukraine is a beautiful, bucolic land. It contains the foothills and smaller mountains of the Carpathian range. The Carpathians are well known in Europe, but not the small slice that is part of Ukraine. The majority of the Carpathians lie further south in Romania, famous as part of Transylvania. This is a forgotten land, relatively unknown, with a modern history that is complex and confusing. Ukraine, roughly translated means borderland, and Carpatho-Ukraine, is the ultimate borderland in a border country. A quintessential frontier, it has been an appendage of empires and nation-states from time immemorial. In the last one hundred years it has been the playground of a withering array of political entities. These have included the Austro—Hungarian Empire, the Hungarian Red (Communist) Republic, Romania, the West Ukrainian People’s Republic, Czechoslovakia, Hungary, the Soviet Union and the Ukraine. It has been conquered and occupied, as well as autonomous and independent. Presently it is a province of Ukraine, but has a coat of arms and flag that is almost an exact replica of the one that was used when it declared independence.

The idea of an independent republic that could not even last a day seems to be an historical absurdity. Was Carpatho-Ukraine unworthy of nationhood? Was this an attempt to take advantage of a specific geo-political situation? This slice of the sub-Carpathians failed as an independent nation in 1939 because it was crushed by powerful geo-political entities carving up Europe to suit their own interests. Paradoxically it was only because of power politics that Carpatho-Ukraine was able to gain its independence, if only for one day. 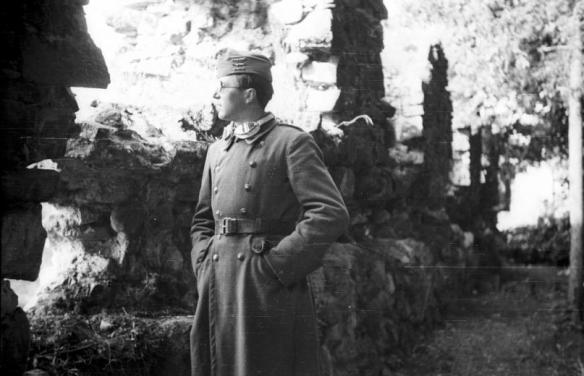 History As Opportunism: The Disintegration of Czechoslovakia
To understand, the situation Carpatho-Ukraine found itself in, one must understand what was happening to Czechoslovakia, the nation-state it was part of from 1919 to 1939. Adolf Hitler and Nazi Germany first began to dismember Czechoslovakia by occupying the Sudetenland to “protect” the German population from the Czechs. Hitler and his henchmen were not the kind of geo-political players who could ever be appeased. It was not long before the Nazis wanted all of Bohemia and Moravia, the traditional homeland of the Czechs. In addition, Hitler had allowed Hungary to take the southern part of Slovakia, with its large Hungarian population. Meanwhile the rest of Slovakia had declared autonomy. Because of this, Czechoslovakia was being divided or perhaps more to the point, hyphenated. Its name was actually changed to Czecho-Slovakia, reflecting the virtual separation of Slovakia from the Czech portion of the state. Forgotten in the unfolding of this historical tragedy was a third, bit player.

The far eastern quarter of Czechoslovakia was known as Trans-Carpathia. It was neither Czech nor Slovak. Neither was it Hungarian, even though it had been part of the Hungarian portion of the Austro-Hungarian Empire prior to World War I. It contained a smattering of Slovaks, Germans, Hungarians and Jews, but two-thirds of the population was Rusyn or Ruthenian, a people who were akin to the larger Eastern Slav population of Ukraine. Eventually, perhaps inevitably they would come to be called Ukrainians and the land they inhabited as the Carpatho-Ukraine. Following World War I Ukraine as a political entity had failed. Thus, Carpatho-Ukraine was attached to Czechoslovakia in 1919. Fast forward two decades, with Czechoslovakia disintegrating, Carpatho-Ukraine declared autonomy on October 11, 1939. Five months later, on March 14th, as the Germans stormed into Bohemia and Moravia, and Slovakia about to become an independent nation, a Carpatho-Ukrainian parliament convened in the city of Khust. There they voted to become an independent republic.

Panorama of Khust, Ukraine – the capital of the Republic of Carpatho-Ukraine (Credit: Власна робота)

No Man’s Land – Oppressors and the Oppressed
Within a few hours of this declaration the leaders of Carpatho-Ukraine fled into exile. The reason, Hungarian troops were already crossing the border. By the evening of March 15th a Hungarian force the size of two army divisions had invaded Carpatho-Ukraine. The new republic’s defense force, known as the Carpathian Sich, consisted of only 5,000 troops. By the next morning, Carpatho-Ukraine ceased to exist. It was now part of Hungary, despite the fact that less than ten percent of its population was ethnically Hungarian. Why did the Hungarians want this region? It allowed them a strategic wedge between Romania and Czechoslovakia (which ironically now ceased to exist). These states had dismembered “Historic” Hungary in the aftermath of World War I. Now the Hungarians were reconstituting their former domains. Amidst this geo-political morass were the Carpatho-Ukrainians. Their incipient state vanished into oblivion, their autonomy was gone. Nonetheless, a historic seed had been planted.

The Hungarians would come to regret their land grab. Although the Republic of Carpatho-Ukraine lasted less than a day, Hungarian rule over the area was also fleeting. Only five years later, in 1944, the Soviet Army came roaring out of the east. Many of the Hungarians and virtually all Germans in the area were either deported to the Gulag or murdered. Carpatho-Ukraine now became part of the Ukrainian Soviet Socialist Republic which was part of the Soviet Union. Thus, Carpatho-Ukraine became a constituent of a constituent republic. Interestingly, the idea of a Republic of Carpatho-Ukraine did not end on that fateful Wednesday of March 15th, 1939. It has had an intriguing after life, one that will be discussed in a coming blog post.